Google is announcing a vague plan to provide Android users with more privacy from ad tracking technology… but unlike Apple, which has basically made tracking an opt-in experience on iOS, Google is trying to find a way to offer more privacy without completely gutting the advertising model that accounts for most of the company’s profits. We’ll see how that goes.

In other recent tech news from around the web, with the Steam Deck handheld gaming PC set to begin shipping in less than two weeks, Valve continues to improve its Proton software that allows many Windows PC games to run on Linux. Nintendo, meanwhile, is showing one of the down sides of internet-connected game consoles: the company is shutting down its eShop for the Wii U and 3DS next year, and those are the only ways to purchase some classic games for those consoles, which will make the company’s older consoles a little less useful in the future. And an intriguing homemade computer showed up in an unusual place recently: the /r/woodworking subreddit. 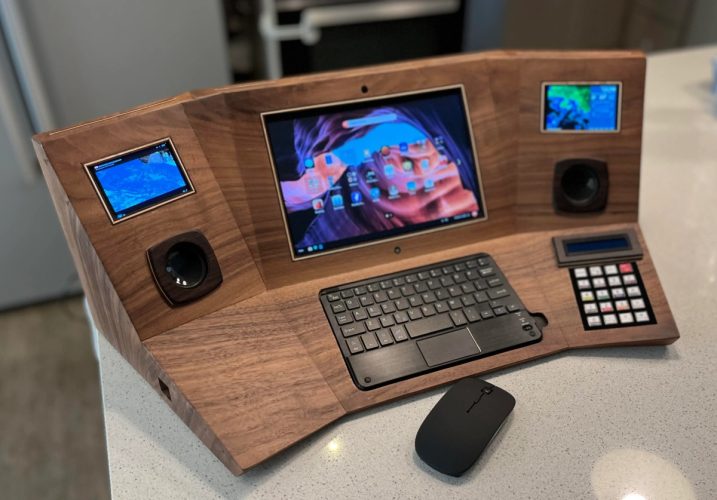 This custom computer is actually made from three Raspberry Pi systems, each powering its own display and positioned in a custom walnut enclosure along with a keyboard, number pad, and speakers. Redditor /u/mw33212 says they designed the system as a first computer for their son. You can find more pictures plus additional details about the project in a reddit post.

The Bleu Jour Root is a compact, fanless PC powered by an AMD Ryen Embedded processor with prices starting at 650 Euros and support for up to Ryzen Embedded V2718, 32GB RAM, and a 2TB SSD.

Valve releases proton 7.0 with support for playing 20+ additional Windows games on Linux, support for Epic’s EasyAntiCheat DRM, local decoding of H264 videos, and many bug fixes and other improvements.

Nintendo Closing 3DS & Wii U Shops In 2023, Has ‘No Plans To Offer Classic Content In Other Ways’ [Kotaku]

Nintendo is shutting down its eShop for the Wii U and Nintendo 3DS on May 23, 2022. That means you won’t be able to buy content or download free content like game demos, but you’ll still be able to redownload games and get software updates… for a while. More details are available in Nintendo’s announcement.

While Apple has basically made tracking users for advertising purposes an opt-in feature on iPhones, Google says its Privacy Sandbox initiative for Android will explore ways to increase user privacy while continuing to support advertising technologies.