This was a strange year for Intel’s mobile processor family. The company’s 12th-gen chips feature a hybrid architecture that puts high-performance and energy-efficient CPU cores on the same chip, theoretically to help balance performance and power consumption (and, by extension, battery life). But the company also introduces a new set of 28-watt P-series mobile chips designed to fall somewhere in between the 15-watt U-series and 45-watt H-series.

For some reason PC makers opted to ship a lot of this year’s thin and light laptops with those 28-watt chips rather than the more efficient U-series processors. And while that they offered big performance gains over last year’s ultraportable notebooks, it also meant that battery life suffered greatly. Basically if you took a 2021 laptop that shipped with an 11th-gen U-series chip, scooped out the mainboard and processor and replaced it with a 12th-gen P-series chip, you’d probably lose several hours of battery life. 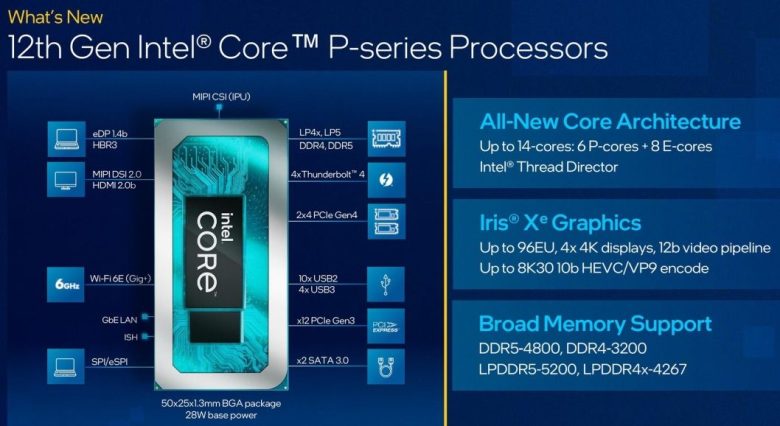 While I didn’t review a lot of hardware this year (I’ve been busy with other projects that eat up a lot of the time I’d normally devote to reviews), I did take a few devices with Intel P-series chips for a spin, including One Netbook T1 tablet and the latest version of the Framework Laptop. For the most part they were great. When it came to battery life though, they were incredibly underwhelming.

And I’ve noticed the same complaint over and over when reading reviews of laptops that shipped with P-series chips on other sites. That’s one of the reasons I opted for an AMD Ryzen-powered laptop when I bought myself a new notebook this fall.

Maybe things will look better next year when Intel brings its 13th-gen chips based on Raptor Lake architecture to market. They’ll have the same hybrid architecture as this year’s 12th-gen chips (with Performance and Efficiency cores on the same chip), and they’ll probably come in U, P, and H series segments again. But maybe Intel will figure out a way to actually reduce power consumption of its 28-watt chips when you don’t actually need all of their horsepower. Or maybe PC makers will offer more devices with U-series chips for folks who’d prefer to prioritize battery life over bleeding-edge performance.

For now, I’m just glad to see I’m not the only person wondering what Intel and PC makers were thinking when they put out such a large number of laptops that were a step forward in terms of performance and a step back in terms of battery life. The Verge’s Monica Chin calls Intel’s P-series a step back in a year-end op-ed.

I’ve reviewed fewer laptops this year than The Verge’s Monica Chin, but I’ve also been underwhelmed with the battery life on models with Intel Core P-series processors. Performance is pretty good. But if you’re in the market for the thin and light laptop’s that tend to have these chips, you probably don’t want a model with half the battery life of a 2021 model with a U-series chip. Hopefully Intel fixes this with next year’s 13th-gen chips.

Like the BBC Micro:bit, this tiny single-board computer is designed for the education market, but it has a faster processor, more RAM and storage, USB-C instead of micro USB, and WiFi instead of Bluetooth.

The popular, powerful, cross-platform tool for editing audio and video and color correction was already available for Windows, Mac, and Linux. Now it’s also available for iPads. You can download it for free from the App Store. There’s a $95 in-app purchase to upgrade to the Studio version, but the basic free app still offers a lot of features, now with a tablet-friendly user interface.

Christmas is coming and we’re preparing a present for you… Sailfish OS 4.5.0 is almost here!🎁

We aim for a January release after community testing and final fixes based on feedback.

Until then a very Merry Christmas and a Happy New Year!🎄🎉 #SailfishOS #Jolla pic.twitter.com/6dT5uSsNCL

Messaging can currently receive SMS messages and notify users about them. Also, thanks to a notification sound added to the shell, you can hear when they arrive. pic.twitter.com/sAjZrYrJ96