It’s also one of the first laptops to feature a Microsoft Pluton security co-processor and, as prominent Linux developer Matthew Garrett discovered, it ships with the UEFI configured to prevent you from booting anything other than Windows.

It’s actually pretty simple to flip a switch in the UEFI settings so that you can boot alternate operating systems, but it shows just how much control Microsoft has over the software you can run on computers that ship with Windows pre-installed. 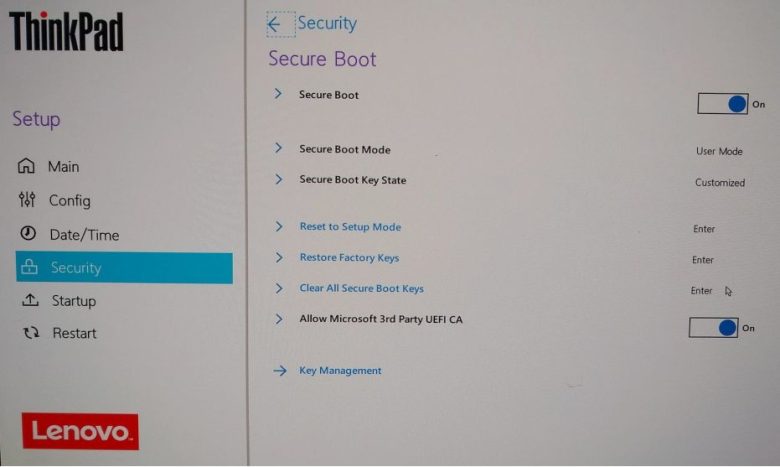 It’s been more than a decade since Microsoft first began insisting that PC vendors enable Secure Boot on PCs that ship with Windows. While the move initially had some folks expressing concern that this would make it virtually impossible to boot Linux or other non-Microsoft operating systems on those computers, the issue has largely been moot, since most major Linux distributions make use of Microsoft’s support for 3rd-party UEFI certificates.

What’s unusual is that Lenovo’s new laptops with Ryzen 6000 series processors and Pluton security co-processors disable that functionality by default. At least there’s still a way to turn it back on… for now.

Lenovo laptops with Microsoft Pluton security co-processors (ie, model with Ryzen 6000 chips) have 3rd-party UEFI certificates disabled by default, which means you need to change a Secure Boot setting before you can boot a Linux distro. https://t.co/5mu8IcY5ri pic.twitter.com/GzcZMPReHh

Using the GPD Win Max 2 mini gaming laptop with an external GPU to turn it into a full-fledged gaming PC capable of handling games at 1440p resolution with high graphics settings when you’re tethered to a desktop graphics dock. https://t.co/kLrXvZ71Tj

MacintoshPi lets you run Mac OS 7, 8, or 9 emulators in full-screen mode on a Raspberry Pi via a series of scripts that install on top of Raspberry Pi OS Lite. There’s also a Commore64/128/Pet emulator built in. https://t.co/qpzWvNsk0t