The AYA Neo is a handheld gaming PC with a 7 inch, 1280 x 800 pixel touchscreen display surrounded by game controllers, an AMD Ryzen 5 4500U processor with Radeon Vega 6 graphics, 16GB of RAM, and a 512GB PCIe NVMe SSD.

After shipping the first small batch of devices to customers in China, AYA announced in February that it would start a crowdfunding campaign for international customers after Chinese New Year. Now the company says close to 40,000 people have signed up to be notified when the campaign goes live… which it hasn’t yet.

Like other PC makers, AYA has been struggling with a global shortage of electronics components, and the company says it’s waiting until it’s in better shape before launching an Indiegogo crowdfunding campaign.

The company did also announce that accessories including a carrying case, tempered glass screen protector, handle grip, and rocker cap would be available as part of the campaign. The most interesting accessory, though, might be a docking station which will allow you to use the Neo like a desktop computer thanks to is HDMI and Ethernet jacks, two USB Type-A ports, and two USB-C ports. 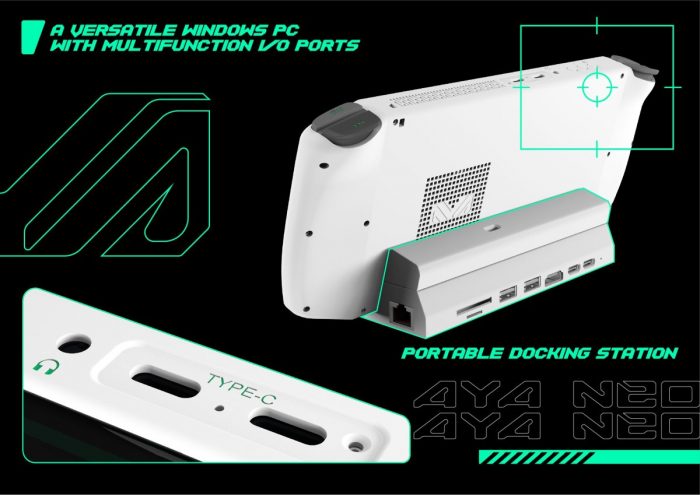 Since the dock connects to the bottom of the computer, it also leaves you with easy access to the two USB-C ports and headset jack on the top of the Neo.