The gadgets we use daily don’t appear out of thin air. It takes energy, mineral resources, and a lot of labor to create a smartphone, tablet, laptop, or desktop computer. One of the many consequences is that PC and phone makers are contributing to global climate change a little bit with every device they produce.

But Apple is promising to go completely carbon neutral by 2030. The company says it’ll due that in part by cutting its carbon emissions by 75 percent over the next 10 years with approaches that include investing in renewable energy, use of low-carbon product design, and and emphasis on recycling. And for the other 25 percent, the company will focus on “developing innovative carbon removal solutions” including forest restoration and protection projects. 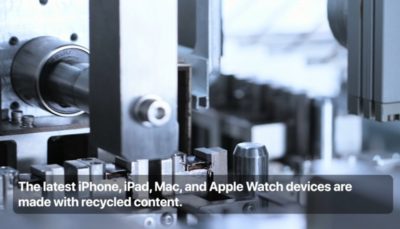 Apple isn’t the first company to make this kind of pledge. Microsoft announced its own plans to go carbon negative by 2030, while Amazon hoes to be carbon neutral by 2040.

While reducing emissions is a laudable goal, this is an entirely voluntary program on Apple’s part and there are no consequences if the company fails to achieve its target. And that’s one of the many reasons why it’s unclear if piecemeal corporate pledges will make much of a dent on global carbon emissions in the coming years… especially if the biggest polluters including oil and gas companies don’t take similar steps.

3 replies on “Lilbits: Apple pledges to go carbon neutral by 2030”