Every quarter a handful of analysts release reports letting us know if shipments of devices like PCs, smartphones, tablets, and smart home devices are rising, falling, or flat. Sometimes this data gives us a good idea of current and future trends. This year, I’m not really so sure what it tells us.

With that in mind, IDC says PC shipments from January 1 through March 31 of this year were up a whopping 55-percent over the same period last year. But there are so many unusual factors that it’s hard to say what this means for the future.

A report from another firm, Canalys, also puts the year-over-year increase at 55-percent, while rival research firm Gartner says the increase was just 32-percent, but the two companies have different criteria for what does and does not count as a PC. Also, 32-percent would be huge in any other year. 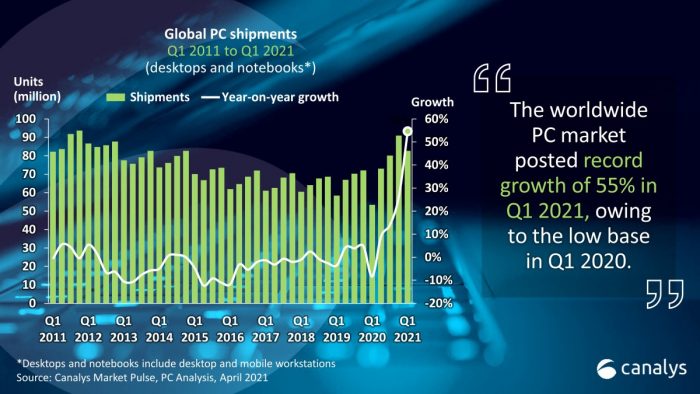 Last year factories in China were shutting down during the first quarter as the pandemic began to affect daily life there. Since then the factories have opened up again, but demand for home computers has risen as students and workers have been looking for technology to work from home. Meanwhile chip shortages mean that while demand is high, supply is constrained. And COVID-19 is hardly in the rear view mirror yet, but with global vaccination efforts picking up people are starting to think about what the world will look like in a year or two… and nobody really knows whether work-from-home will become the new normal for folks who can, or if most will head back to the office.

All of which is to say… more PCs were shipped last quarter. But I don’t know how much that tells us about what to expect next year or even next quarter.