Samsung’s Exynos 5410 processor sounded a bit crazy when the company announced it in January. It’s a smartphone chip with eight processor cores.

But now that the chip’s actually available in some Samsung Galaxy S4 smartphones, it turns out might not be all its cracked up to be. First, it turns out you’re only actually using 4 cores at a time. And second, the chip doesn’t seem to be much faster than a Qualcomm Snapdragon 600 quad-core CPU, but Galaxy S4 phones with Qualcomm’s chip get much better battery life.

Now  a new Exynos 5 Octa is on the way. Samsung says it’s “more powerful,” and “enhanced,” but we’ll have to wait until next week to get details. Hopefully it’ll be designed to take advantage of more of ARM’s big.LITTLE technology to improve efficiency, which should lead to better battery life. 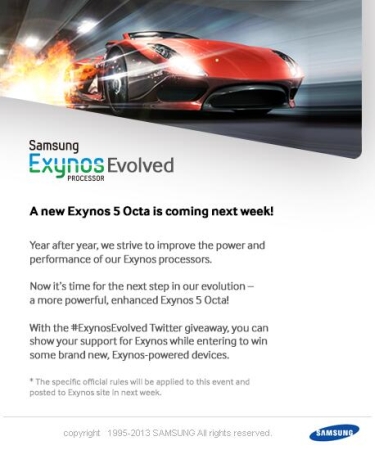