Amazon Prime Music launched this week, giving subscribers access to a million songs as part of their regular Amazon Prime membership. While the catalog isn’t as big as that of rivals Spotify or Rdio, it probably doesn’t have to be: Prime Music is more of a perk for existing subscribers than a full-fledged, standalone music service.

For $99 per year, Prime subscribers get access to a selection of streaming movies and TV shows, songs and albums from popular and obscure artists, the ability to borrow up to one eBook per month, and free 2-day shipping on millions of physical items.

Can’t find free versions of the songs, movies, or eBooks you want in the Prime library? No problem… you can probably buy them from Amazon… the company uses Prime to hook you on its services so it can sell you more stuff. But I’m OK with that, since for $99 per year Amazon offers some of the best features of Netflix, Spotify, and Oyster and even if it doesn’t have the same selection of content, there’s plenty of stuff worth watching, listening to, or reading. 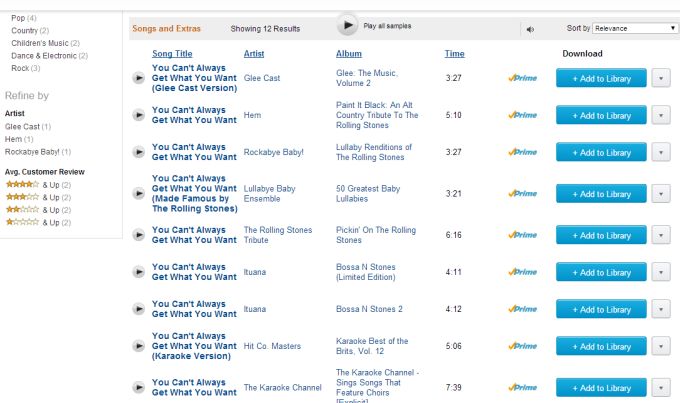 You can’t always get what you want (like the Rolling Stones version of the iconic song), but if you try sometimes, you might find… you get something, like a selection of covers of the tune. Or you could just browse the Prime library for music from artists you actually do want to hear.

Here’s a roundup of tech news and tips from around the web.