Want to use your web browser to stream video from services like Netflix, Hulu, Amazon, and BBC iPlayer? You’ll need to put up with the DRM (Digital Rights Management) features used by those services — content owners want to make sure you don’t save or redistribute videos, watch them in countries where they don’t have redistribution rights, or otherwise do things on your own terms.

Once upon a time, the standard way to add DRM to a web browser was to install a third-party plugin such as Adobe Flash or Microsoft Silverlight. These days there’s a push toward building support right into the browser as a simpler, more secure solution. And while Google, Microsoft, Apple, and others have no problems with that, Mozilla’s been a bit of a holdout, since DRM is by its very nature closed source. 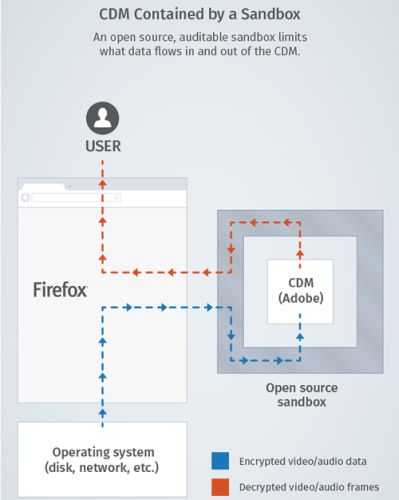 Rather than lose potential users who might flee to other browsers though, Mozilla has made a decision to enable support for DRM in upcoming versions of Firefox… but the company clearly isn’t happy about it. Mozilla’s Andreas Gal titles his blog post justifying the decision “Reconciling Mozilla’s Mission and W3C EME.”

Long story short, Mozilla’s approach is a little more open than anybody else’s. The non-profit is providing a sandbox for the DRM content to play in, which should help protect users from having code that they can’t inspect affect their computers in unexpected ways. And users can disable the DRM-specific features in Firefox.

But that’s not enough for some folks.  It’ll likely be a few months before the new DRM system ends up in stable builds of Firefox.