Dell’s tablet lineup currently consists of 8 inch and 10.8 inch Windows 8 tablets and cheaper 7 and 8 inch Android models. If TabTec’s leaked Dell product roadmap is to be believed, the company plans to launch new versions of each of those tablets in the second half of 2014.

Unfortunately that’s about all the roadmap tells us. I guess it’s nice to know Dell sees a future in tablets that come in a range of sizes and with a range of operating systems. But it be even nicer to know what kind of features to expect from next-gen hardware. 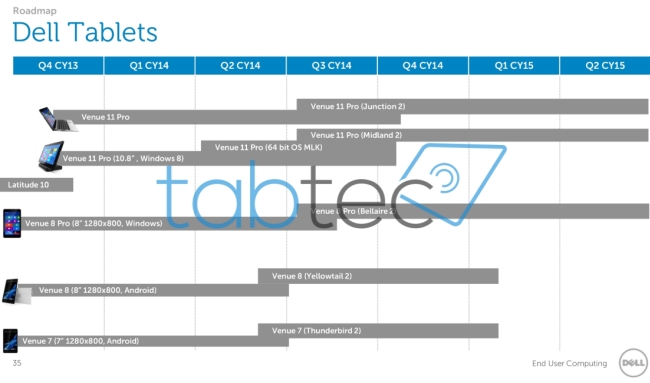 TabTec also has details about Dell’s upcoming notebooks and hybrids, including an 11.6 inch 2-in-1, a Dell Inspiron 11 3000 Series notebook with an AMD processor, and a new Inspiron 13 inch 2-in-1 ultrabook.