It seems like every few years there’s a new gadget to add to your collection. The problem is that a smartphone doesn’t replace a laptop, and a tablet doesn’t replace either — and now you’ve got three gadgets which need to be able to talk to one another (or the web) if you want to keep your music, email, and other data synchronized.

Designer Prashat Chandra has put together an attractive concept for a module system that would let your gadgets work together so that you don’t need to synchronize your data — because it’s all actually on one or two of your devices anyway.

He calls it the Lifebook 2013, and basically it’s a laptop shell which would use a removable tablet as a keyboard (and possibly the storage or even CPU) for the laptop. A removable MP3 player would work similarly. 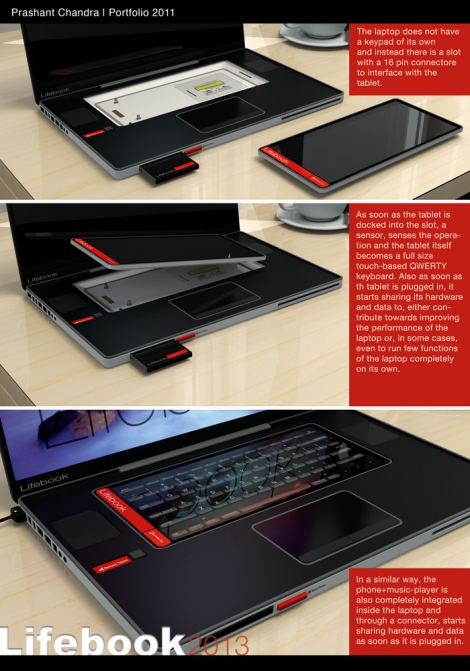 This isn’t the first time we’ve seen this type of concept. It looks a lot like René Woo-Ram Lee Bento PC concept, or even the Asus Padfone — which the company actually plans to bring to market this year.

Then again, Chandra’s Lifebook 2013 isn’t really much more than a drawing at this point, and it’s even tougher to type on anon-existent keyboard.

via Gizmodo, Treehuger, and Yanko Design