Samsung, Huawei, and TCL are all showing off some sort of foldable phone at MWC this week. Royole already introduced one, and Xiaomi seems to have one in the works.

So what about LG? The company’s not launching an all-out foldable device yet. But if you want more screen space, the company does have another option.

The LG Dual Screen is an optional accessory for the new LG V50 ThinQ 5G that turns the smartphone into a dual-screen handheld device. 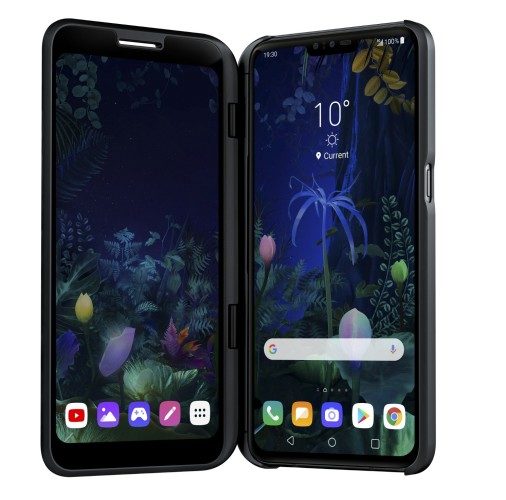 Attach the case and you can use one screen to watch a video while you use another to compose an email or play a game.

One thing you don’t really get with this sort of design is a tablet-like experience. There’s a huge black border separating one screen from the other. Dual Screen doesn’t transform your phone into a tablet that you’d want to use to watch videos or play games on a larger canvas. But it does give you more room to run two apps at once or free up your primary screen by using a second one for input: you can use the second screen as a keyboard or game controller.

You should theoretically be able to do something similar on foldable phones, but it’s not something companies like Samsung or Huawei have spent a lot of time highlighting. But I wish they would — after all, one of the biggest problems with multitasking on a typical smartphone is that when you’re looking at two apps on the screen one of them will all-but disappear as soon as you open a keyboard to start typing.

LG says the Dual Screen accessory can also be used as a dedicated game controller in select games, allowing you to play without putting your thumbs on the game screen at all.

The accessory can be positioned at either a 104 degree or 180 degree angle to the primary display, and it draws power from the smartphone’s 4,000 mAh battery so it doesn’t need to be charger separately (although I suspect you’ll have to charge your phone more often if it’s driving two displays.