There are a growing number of Android tablets with Intel Atom processors. But LG’s going a bit higher up the food chain with its new Tab Book 11.

It’s an 11.6 inch Andorid tablet with an Intel Core i5 Haswell processor and a built-in keyboard that lets you use the system like a notebook… an Android-powered notebook. 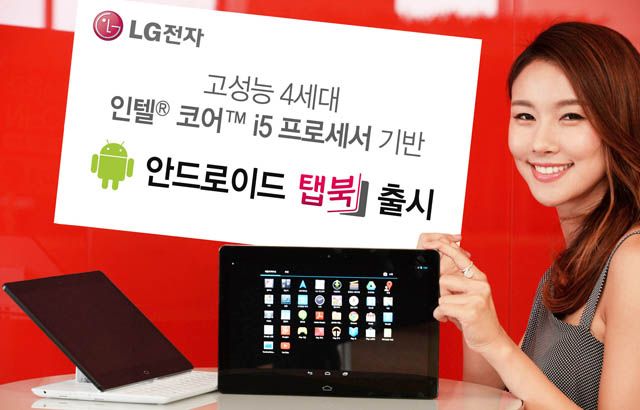 The LG Tab Book tablet measures 11.2″ x 7.6″ x 0.66″ and weighs 2.3 pounds. If that seems kind of heavy for a tablet, that’s because the keyboard isn’t detachable: it’s built into the tablet and tucks away behind the screen when not in use.

All told, the Tab Book has the guts of a decent Windows tablet or ultrabook. It just happens to ship with Android instead of Windows.

In fact, LG already has a Windows version of this machine. It’s called the Tab Book2 and it also has a full HD display, a keyboard that slides out from behind the system, and an Intel Haswell processor. LG introduced the Tab Book2 Windows slider at the Consumer Electronics Show in January.