LG is showing off a few upcoming Windows 8 products, including a convertible tablet with a pop-out keyboard, an 11.6 inch touchscreen display, and an Intel Atom Clover Trail processor.

It’s called the LG H160, and it looks a lot like the Samsung Series 7 Sliding PC, Asus Eee Pad Slider, or the upcoming Sony Vaio Duo 11. 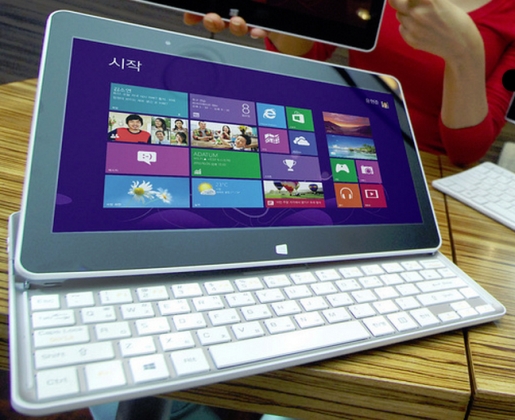 Unlike those tablets though, you don’t manually slide out the keyboard. Instead you press a button on the side of the case and the screen snaps up and back to reveal a QWERTY keyboard.

The LG H160 measures about 0.63 inches thick, which makes it kind of thick for a tablet, but pretty thin for a notebook. It weighs about 2.3 pounds and the power adapter weighs just 4 ounces.

LG says the tablet gets up to 10 hours of battery life, has a 178 degree viewing angle, and features USB, WiFi, HDMI, and a micro SD card slot. It can also be used with a “smart touch pen,” although it’s not clear if that means the tablet features an active digitizer or if that’s just a fancy name for a capacitive touch stylus.

While LG was a little light on specifics in the official press release, the folks at UMPC Portal did a little digging and found out a Korean site with a video of the tablet in action. The site also confirms that the convertible tablet features a 1366 x 768 pixel display and an Intel Atom Z2760 Clover Trail processor.