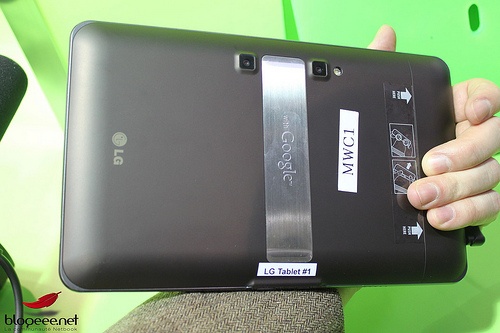 LG is holding the official coming out party for its Optimus Pad tablet at Mobile World Congress this week. We already knew a fair amount about this tablet, also known in the US as the G-Slate. It runs Google Android 3.0, has a dual core NVIDIA Tegra 2 chip, and can record and display 3D video. But now we have the rest of the details, and a number of sites have posted hands-on photos and videos as well.

The tablet will be sold as the G-Slate in the US, and the Optimus Pad in Europe and Asia. It has an 8.9 inch, 1280 x 768 pixel capacitive touchscreen display and it can handle 3G, WiFi, Bluetooth and GPS. It has an HDMI port for displaying video on a monitor or TV.

On the back of the device you’ll find two 5MP cameras for recording stereoscopic 3D video. There’s also an LED flash. In order to actually watch 3D video on the tablet, you’ll need a special pair of glasses.

The Optimus Pad has a front-facing 2MP camera as well, a micro USB port, and a 3.5mm headphone jack. The tablet has 32GB of storage.

You can check out some hands-on videos of the tablet from the MWC show floor after the break, thanks to Netbook News, Engadget, jkkmobile, and Blogeee.