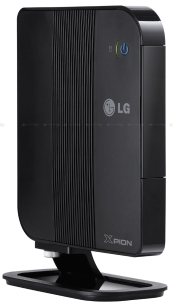 LG is launching its first tiny desktop computer to pack NVIDIA ION graphics. The LG XPION X30 has a 1.6GHz Intel Atom 230 processor, 2GB of RAM, and a 250GB hard drive. Thanks to the NVIDIA ION graphics chip, it can also handle HD video playback and some more graphically intense applications including some modern video games.

At launch the nettop will run Windows Vista, but with Windows 7 just around the corner, I suspect we’ll see an updated version of the X30 soon. I’m a bit baffled by the XPION name though, which kind of implies that this ION-powered nettop would run Windows XP. But in order to ship the computer with XP, LG would have had to cut the RAM and hard drive to 1GB and 160GB respectively.