WebOS may not be shipping on smartphones or tablets anymore, but LG has been using a version of the software for its smart TVs for the past few years… and the company plans to unveil a new version of webOS at the Consumer Electronics Show in January.

Among other things, webOS 3.0 includes new features that let you view videos from two different sources at the same time or stream mobile apps from your smartphone to your TV. 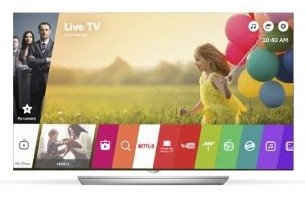 The multi-view feature lets you view two different channels at the same time, or watch a Blu-ray movie and a TV show simultaneously. Sure, you probably aren’t going to spend a lot of time doing that… but I suppose it might be nice to be able to keep an eye on the football game while watching a movie.

There’s also a new Music Player app that lets you play music through your TV speakers even when the screen is off, a “Channel Advisor” that shows upcoming program information about shows you frequently watch, and an IoTV app that lets you use your TV to control LG smart home appliances. LG says Internet of Things products from other manufacturers will also be supported.

LG is highlighting a trio of features it called “Magic,” including Magic Zoom, Magic Remote, and Magic Mobile Connection. That last one is the feature that lets you view your smartphone apps on a TV. Magic Remote lets you control set-top-boxes and DVRs with TV remote. And Magic Zoom, which somehow “enables users to magnify objects and letters without any degradation in picture quality.”

WebOS 3.0 will be available on LG’s new 2016 line of smart TVs. What’s less clear is whether it will  be available as a software update for the company’s older TVs.