LG’s new flagship smartphone features a 5.2 inch display, one of the fastest mobile processors around, and an unusual design with the power and volume buttons on the back of the device, below the camera.

The company says the LG G2 is designed to be powerful, but also easy to use — since your fingers are typically on the back of the phone when you’re holding it, that’s where the button should be — and the company says a 5.2 inch screen is about the largest display you can fit on a phone that’s comfortable to hold in one hand. 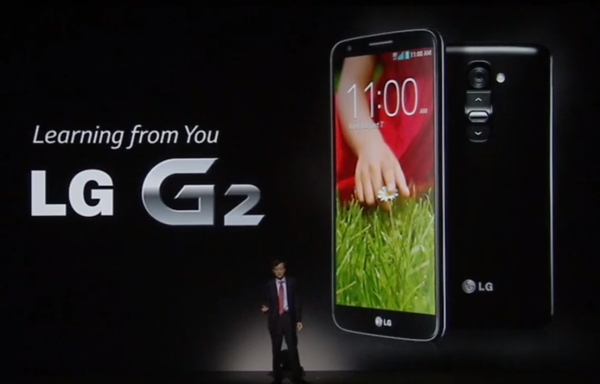 Under the hood, the LG G2 will be powered by the Qualcomm Snapdragon 800 processor — and Qualcomm says it’ll be the first handset to ship worldwide featuring the new processor.

The handset has a 13MP camera on the back and a 2.1MP front-facing camera, and features a hefty 3,000mAh battery.

The LG G2 will ship with Android 4.2.2 Jelly Bean software along with LG’s custom apps including QuickMemo, QuickRemote (which lets you use your phone as a universal remote,” and a Guest Mode option that lets you loan your phone to someone and let them access only apps that you’ve pre-approved.

LG is playing up the buttons on the back of the device as a major “breakthrough,” but I’ll be curious to see how many people accidentally turn off their phones or snap photos when they just trying to hold the phone still.

The company also isn’t leaving touchless controls to Motorola. You can answer phone calls by holding the phone to your ear, or turn on the display by knocking on the screen.