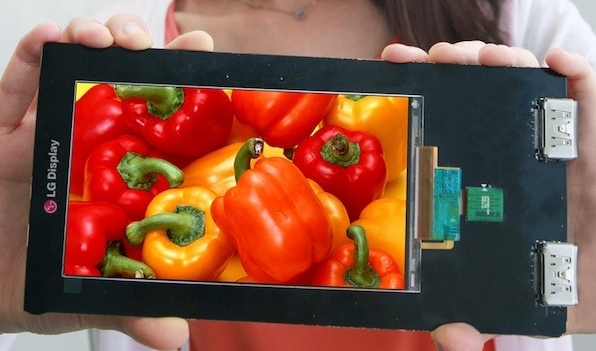 LG calls the screen a Quad HD LCD panel, and it has a pixel density of 538 pixels per inch, which kind of blows away just about anything else on the market. It also might be the definition of overkill.

There’s been a lot of discussion on whether Apple’s definition of a Retina display really means anything. The idea was supposed to be that an average person wouldn’t be able to spot individual pixels while holding a phone, tablet, or laptop the usual distance from one’s eyes. But some people have better eyesight than others.

But generally the more pixels you can pack onto a screen, the better images, videos, and text will look. Unfortunately you’ll also need increasingly powerful graphics processors to crank out imagery to high-resolution displays, which means that any smartphone with this sort of screen is going to need a pretty fast processor and probably a fairly sizable battery.

LG’s screen is 1.21mm thick, 430 nits bright, and it’s an IPS display which means it should have wide viewing angles.

There’s no word on if or when we’ll ever actually see a phone or other device using the new display.