The LG Gram 16 is a notebook with a 16 inch, 2560 x 1600 pixel IPS touchscreen display, an Intel Tiger Lake processor, and a slim design. First announced in South Korea last month, the new laptop weighs just 2.6 pounds and it’s set to go on sale in LG’s home country this month.

But it looks like there’s another model on the way as well: a 3.3 pound LG Gram 16 convertible just passed through the FCC website. This model has a touchscreen display, pen support, and a 360-degree hinge. It’s likely coming to the United States soon, and you can find the user manual and photos of the laptop’s interior and exterior at the FCC.

Update: Ahead of the virtual Consumer Electronics Show, LG has officially unveiled its 2021 LG Gram lineup which includes the new LG Gram 16 2-in-1 notebook featured in this article as well as four other new models.

The user manual confirms that the notebook will be available with Intel Core i3, Core i5, and Core i7 processor options and that the notebook supports pen and touch input and features a convertible tablet-style design that allows you to use the LG Gram 16 in notebook, tablet, tent, or stand mode.

Other features include LPDDR4x memory (onboard and not user upgradeable), and two M.2 2280 slots for PCIe NVMe or SATA solid state storage, support for WiFi 6 and Bluetooth 5.1, an HD webcam, and an 80W battery. 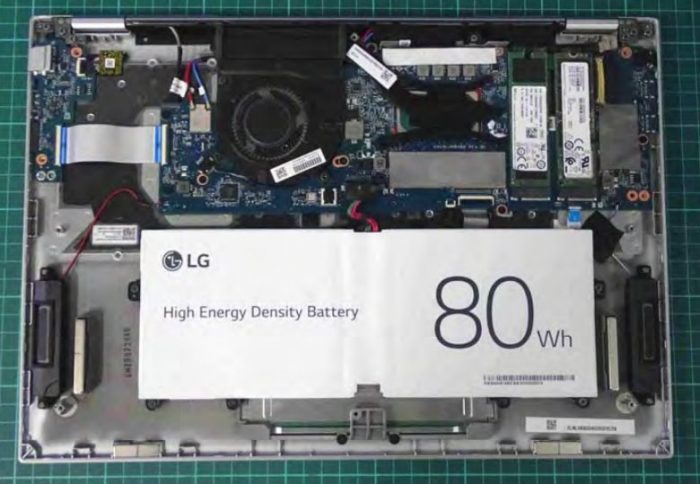 The 3.3 pound (1480 gram) weight would make this new laptop one of the heaviest members of the LG Gram family to date, since this line of notebooks are known for their featherweight designs. But it’s still pretty light for a notebook with a 16 inch display and an 80 Wh battery.

Ports include two Thunderbolt 4, two USB 3.1 Type-A, HDMI, and audio ports and a microSD card reader. The laptop also has a backlit keyboard with a number pad on the right side, an HD webcam, and 5-watt stereo speakers.