The LG G7 ThinQ is set to go on sale in South Korea soon, before hitting North America, Europe, Latin America and Asia in the coming months (Several US wireless carriers have announced the phone will be available for their networks in or around June).

But those features wouldn’t be enough to make a flagship phone stand out in 2018. So LG gave the G7 ThinQ the brightest display and the loudest speaker you’re likely to find on a smartphone this year, an added a dedicated button for Google Assistant, among other things. 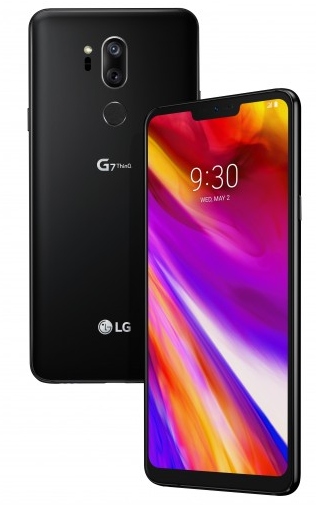 Two other features that make this phone a bit unusual by modern standards? It has a microSD card slot for removable storage and a 3.5mm headphone jack.

Other specs including a USB 2.0 Type-C port, 802.11ac WiFi, Bluetooth 5.0, and NFC. And the phone has an IP68 rating for water and dust resistance. there’s an 8MP front-facing camera and the front and back of the phone are covered in Gorilla Glas 5.

But back to those special features. The LG G7 ThinQ has a “Boombox Speaker” that users the space inside the phone as a “resonance chamber” to effectively make this the only phone with a woofer for amplifying bass frequencies. The company says the phone’s speaker can hit 100 decibels, making the phone about three times louder than the LG G6.

The device has a Hi-Fi Quad DAC and it also supports DTS:X virtual 3D sound and up to 7.1 channel audio through earphones.

LG says the smartphone’s display offers 100 percent DCI-P3 colr gamut and supports brightness up to 1,000 nits for viewability even in direct sunlight. There are also 6 different viewing modes for different environments including auto, eco, cinema, sports, game, an expert.

As for the awkward “ThinQ” naming, that’s part of LG’s new branding for its smart devices, and when it comes to the G7 ThinQ, the company says the phone earns the name in a few ways.

First, it has a dedicated button on the side that you can press to launch Google Assistant. Tap the button twice and it opens Google Lens. There are also some exclusive Google Assistant voice commands that will only be available for the phone.

There’s also support for far-field voice recognition, letting you interact with the phone by voice from up to 16 feet away, allowing you to use the LG G7 ThinQ like a Google Home speaker (if you’re willing to sacrifice a bit of battery life — and privacy — by enabling always-listening support).

LG also includes AI Cam functionality with 19 different shooting modes that you can choose from manually or automatically.

4 replies on “LG G7 ThinQ smartphone has a bright screen, a loud speaker, and “intelligent” camera”