As expected, LG is adding a stylus-toting model to its line of G3-branded smartphones. The LG G3 Stylus looks kind of like LG’s answer to the Samsung Galaxy Note line of pen-enabled phones… but it’s not really.

That’s because while the original LG G3 is a top-tier phone with high-end specs, the LG G3 Stylus has the features of a low-to-mid range phone. 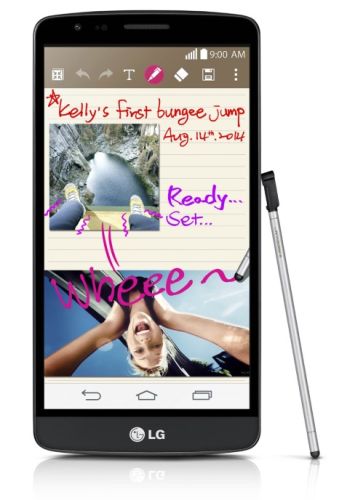 On the bright side it does have a fairly sizeable 3,000mAh battery which is removable and the phone will ship with Google Android 4.4 KitKat software. It has a microSD card slot for removable storage and features 13MP rear and 1.3MP front-faacing cameras.

LG doesn’t mention whether the phone has an active digitizer, but a glance at the photo (and “Rubberdium” name) suggest that the stylus is a capacitive pen which means you can use it to write, draw, or tap the screen with a little more precision than you’d get using your finger. But you won’t get pressure-sensitive input or the ability to interact with the screen by hovering the stylus over the top of it.

Other features include LG’s software such as support for running multiple apps simultaneously using a dual window layout, LG Knock Code which lets you unlock the device by tapping a pattern on the screen, and Gesture Shot which lets you snap a selfie without touching the camera by opening and closing your hand while in view of the camera to start a 3-second countdown.

8 replies on “LG G3 Stylus is a mid-range, stylus-equipped smartphone”