T-Mobile is now taking pre-orders for the LG G3 smartphone, which is expected to hit retail stores July 16th.

Update: Starting July 8th, the phone is also available in the US from AT&T.

Update 2: Verizon is taking orders too, and the phone will ship July 17th.

Update 3: And it’s now available from Sprint as well. 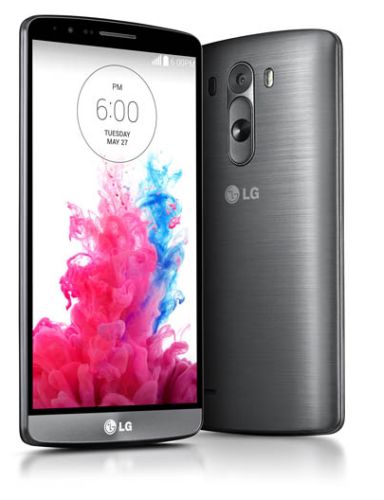 LG’s new flagship phone sports a Qualcomm Snapdragon 801 quad-core processor, a 3000mAh battery, Android 4.4 KitKat software, a 13MP rear camera and 2.1MP front-facing camera, and some special LG features including volume and power buttons on the back of the phone instead of the front and “Knock Code” software which lets you unlock your device by tapping a pattern on the screen.

The T-Mobile version of the phone has 2GB of RAM, 32GB of storage, WiFi, Bluetooth, NFC, and support for T-Mobile’s 4G LTE network. The Quad HD IPS display with 538 pixels per inch is probably the phone’s most unusual feature.

The LG G3 isn’t the only phone with a higher-than-1080p screen, but it’s one of the first to launch with a major US wireless carrier.