LG’s latest smartwatch is the company’s nicest looking model yet. It’s also the most expensive. The LG G Watch Urbane is now available for $349.

That’s $50 more than the launch price for the company’s last smartwatch with a round face and Google Android Wear software: the G Watch R, which you can now buy for just $249. 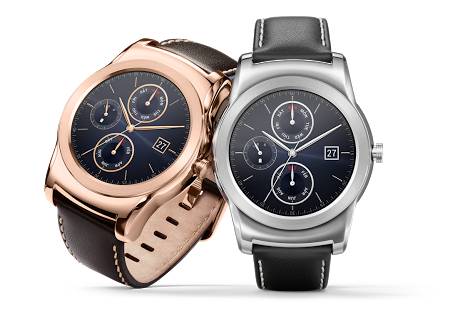 But the Urbane features stainless steel construction and it comes in silver or gold colors. It comes with a replaceable stitched leather wrist band. It has a Corning Gorilla Glass scratch-resistant screen.

Like the G Watch R, the Urbane has an IP67 water resistance rating (which means it’s dust resistant and can sit in up to 3 feet of water). But unlike LG’s earlier smartwatches, the new model supports WiFi as well as Bluetooth. That means you can receive notifications over WiFi even when the watch isn’t near you smartphone.

So there’s at least one feature the Urbane has that its cheaper sibling does not. But $100 seems like a lot of money if all you want is an Android Wear watch that supports WiFi. In fact, you could pick up a Moto 360 for just $180 if you just want a WiFi-capable watch.

The primary reason to choose the G Watch Urbane over competitors would be its design. LG hardly seems to be the only company banking on the idea that people will spend extra money on smartwatches because of their design: Apple charges $349 for its cheapest Apple Watch, but the most expensive models cost as much as $17,000.