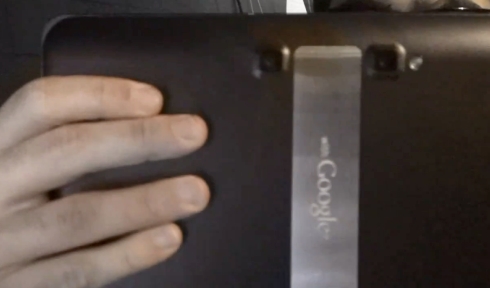 The upcoming LG G-Slate tablet with Google Android keeps appearing in the strangest places. While LG hasn’t released any official photos or any real details aside from the fact that the tablet will run Google Android 3.0 and support 3G and 4G wireless connections. But last week the tablet made a brief cameo appearance in a Korean pop music video. And now it’s made a brief appearance in a video from YouTube user MysteryGuitarM.

While MysteryGuitarM doesn’t refer to the tablet by name and only holds it up to the camera for a few seconds, the branding appears similar to that on a recent LG Android smartphone.

The most interesting thing is that MysteryGuitarM’s video isn’t supposed to be a showcase for the G-Slate. Instead, he’s talking about 3D video and simply pulls the tablet out when he’s talking about different devices that can shoot in 3D — thus confirming rumors that the tablet has twin cameras on the back for recording stereoscopic imagery.