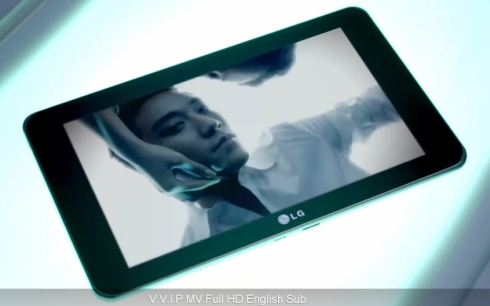 Well shiver me timbers. Rumors have been floating around for the past week or two that LG’s upcoming G-Slate tablet would have a 3D display (no glasses required) and a 3D camera. I hadn’t really placed much stock in those rumors because, well… they sounded crazy. But it tuns out that a tablet with LG branding has shown up in a Korean pop music video and the device appears to have two cameras on the back which certainly lends some credence to the idea of a 3D camera.

LG still hasn’t confirmed the specs for the tablet, and a cameo in a music video isn’t exactly on par with an official announcement. But the LG tablet’s appearance in the video certainly looks like product placement, with the logo displayed quite prominently and for no apparent reason. I also spotted an LG phone at one point in the video, so the product placement certainly seems to be legitimate.

Whether the device actually has a 3D display remains to be seen.

via MovePlayer and Journal du Geek

One reply on “LG G-Slate makes a cameo in a Korean music video, 3D camera and all”