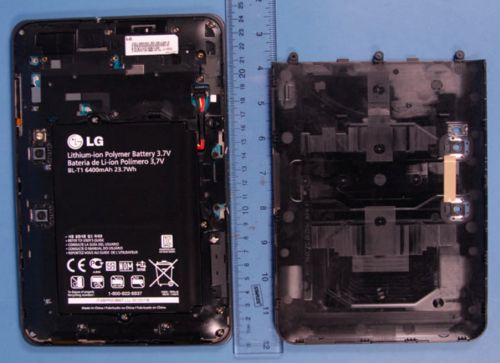 The G-Slate from LG and T-Mobile first showed up at the FCC web site way back in March. But at the time all we got to see were label locations and some test results. Nwo the FCC has published some additional G-Slate documents showing what the tablet looks like when you rip it to pieces.

Not surprisingly… it looks like a tablet. Most of the internal space is occupied by a large 6400mAh, 23.7 Whr battery. You can also check out close-up photos of the wireless modules, antennas and case design. The FCC also has some pretty photos of the test setup, showing the tablet in a nice pastoral setting (usually these photo shoots take place inside).

The G-Slate features an 8.9 inch, 1280 x 768 pixel display, an NVIDIA Tegra 2 processor, 1GB of RAM, and 32GB of storage. It runs Google Android 3.0.  The key difference between this slate and every other Android slate on the market is that the G-Slate has two 5MP cameras on the back for recording stereoscopic 3D video. But you don’t really get a good look at the camera hardware in the FCC photos.