Best Buy is selling the LG G Pad 8.3 online for $350. It’s expected to be available in retail stores in early November. 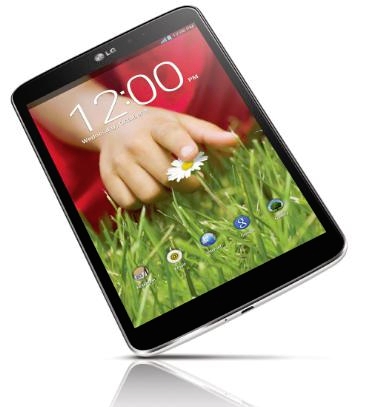 The tablet has 16GB of storage and a microSD card slot for up to 64GB of removable storage. it has a 5MP rear camera and a 1.3Mp front-facing camera.

The LG G Pad 8.3 features WiFi and Bluetooth, packs a 4600mAh battery, and runs Google Android 4.2.2 Jelly Bean with a few extra LG touches including software that lets you switch between apps with a 3-finger swipe, or turn on your tablet by tapping the display twice — the same way you would with an LG G2 smartphone.

LG’s tablet also includes QPair, a utility that lets you sync certain apps on an LG G Pad 8.3 with an LG smartphone. For instance you can see recently opened apps, incoming calls, and other data from your phone on the tablet.