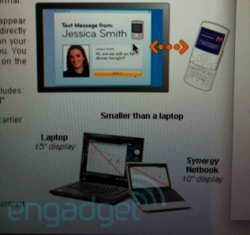 LG’s no stranger to the netbook space. The company has already introduced two netbook models over the past year. But someone in the company’s phone division is apparently thinking of new approaches to netbooks. An Engadget Mobile tipster sent in some photos from an LG survey which detail a possible upcoming product called “Synergy” which could be a codename for a netbook that would work closely with your cellphone.

Her’s the idea. You’d be able to respond to text messages sent to your phone using your netbook. Thanks to its closer-to-full-sized-keyboard-than-anything-you’ll-find-on-a-phone, this could be a killer feature. You’d also be able to see caller ID on your phone and browse photos on your phone.

At the same time, the Synergy netbook would be a standalone computer running Windows XP or Windows 7. It’s not clear if you’d be able to tether the netbook to your phone and surf the web over your phone’s data plan. But it seems clear that there will have to be some sort of connection between the two devices.

The netbook, if it ever comes into being, could apparently be sold for about $149 to customers that sign up for a two year wireless service contract. You know, if LG finds a wireless carrier to partner with.

2 replies on “LG could be working on netbook/cellphone integration”