If Android is Google’s mobile operating system, then Chrome OS is the company’s desktop OS… as in, it has a desktop-like user experience. But so far most devices that have shipped with Chrome OS have been laptops.

Now LG is shaking things up a bit with an all-in-one desktop PC that just happens to run Chrome OS.

The new system is called the LG Chromebase, and LG plans to show the computer off at CES in January. There’s still no word on when it’ll be available to the public or how much it’ll cost. 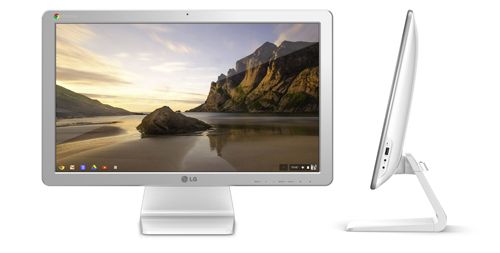 It supports HDMI input, features 3 USB 2.0 ports and 1 USB 3.0 port, an Ethernet jack, and a 1.3MP webcam. The computer has 5W stereo speakers and comes with a keyboard, mouse, and cable organizer.

LG’s Chromebase isn’t the first desktop PC to ship with Chrome OS. Samsung has released a few Chromebox models over the past few years. But the Chromebase is the first all-in-one model. If the Samsung Chromebox is about the size and shape of a Mac Mini, the LG Chromebase is more like an iMac — you know, if an iMac had a Celeron processor, a tiny amount of built-in storage, and an operating system based on a web browser.

If you’re not sold on the idea of using Chrome OS as a primary operating system, the HDMI input means you could use the Chromebase as a display for a traditional PC… with the option of booting straight to a web browser when you’re too busy to load Windows (or another OS). But the Chromebase will probably be a bit more expensive than your typical display.