Lexibook has been making tiny laptops and small tablets for kids since at least 2008. Now the company’s combining the two, with the Lexibook Laptab. It’s a little computer that looks like a netbook, but which runs Google Android, features a touchscreen, and a hinge that lets you fold the screen down flat and use the device like a tablet. 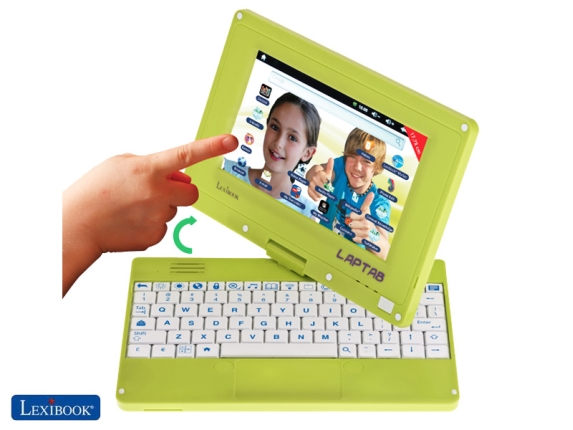 The Lexibook Laptab isn’t necessarily a very good tablet or notebook. But it’s not particularly expensive either. It sells for about 149.99 £ in the UK, which is about $230 US.

It also has a QWERTY keyboard and comes with Android 4.0 and educational apps, games and eBooks.

The Laptab is powered by an Allwinner A10 ARM Cortex-A8 single core processor. While it’s not a particularly fast chip it should be good enough for basic web browsing, reading, and running other Android apps.

Developers have also been running Ubuntu and other Linux distributions on devices with Allwinner A10 chips for a while, so there’s a chance you could pick up this kid-friendly laptop and convince it to run a full GNU/Linux desktop environment instead of Android — although that’s clearly not what Lexibook expects customers to do with this device.

I haven’t seen any US pricing or availability details for the Laptab, but it showed up at the FCC website recently, which suggests that the company is at least thinking about selling the machine in the States.