Lenovo launched a whole bunch of new 2-in-1 Windows notebooks featuring 360 degree hinges this week. Open the lid of the machine and you’ve got a laptop. Push the lid back 360 degrees until it’s touching the bottom of the computer and you’ve got a tablet.

While this design used to only apply to Lenovo’s Yoga line of convertibles, Lenovo recently added 360 degree hinges to its Flex line of laptops as well (up until recently, the Flex line had 270 degree hinges and didn’t work as tablets).

So now that Flex and Yoga laptops both bend over backward to become tablets, what sets a computer like the Yoga 3 11 apart from the Flex 3 11? 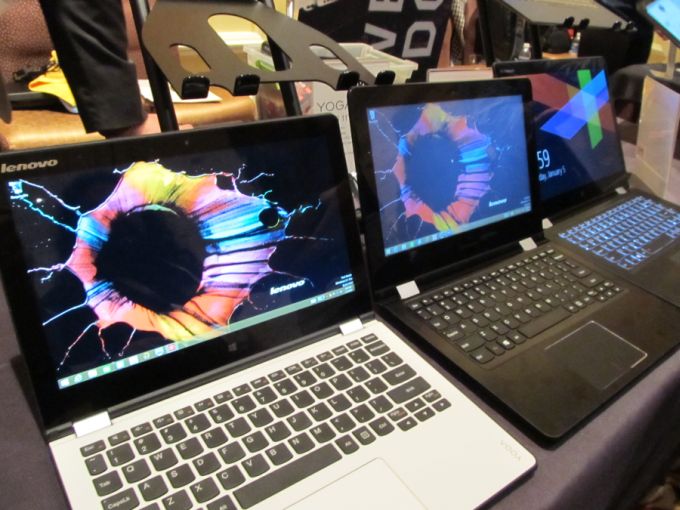 But there are reasons for that. If you place the two devices side by side, it becomes apparent that the Yoga model is thinner, lighter, and has a sturdier case. It has a 1920 x 1080 pixel display, while the Flex 3 11 has a 1366 x 768 pixel screen. The Yoga also has wide viewing angles, while it can be hard to see what’s on the screen of the Flex laptop when you view it from the side.

And the Flex 3 11 has a bigger bezel around the display, making the whole laptop a bit bigger than the Yoga.

Interestingly, it also lives up to its name: if you press down on the lid, you’ll see the plastic flex a little bit. Somehow I doubt that’s what Lenovo meant when the company gave this laptop its name though.

The Flex 3 11 will be available with up to an Intel Pentium processor, up to 8GB of RAM, and up to 64GB of solid state storage, while Yoga 3 11 supports up to a Core i7 Broadwell processor. The Yoga is also fanless, while the Flex is not.

All told, if you can afford the Yoga system, it’s a better computer. But it’s nice to have lower-cost options.

Note that most of the photos below show the Yoga 3 11… because honestly, I just enjoyed holding it a lot more than the Flex 3 11. You can see both systems in action in the video above though.