After going up for pre-order a month ago, the Lenovo Yoga Book is now shipping to customers. The portable computer has a 10 inch touchscreen display and a 360 degree hinge, like other members of the Lenovo Yoga line of products.

But what’s on the other end of that hinge is what makes the Yoga Book unusual: instead of a physical keyboard, there’s a black slate with a Wacom digitizer, allowing you to write or draw with a digital pen, or type and swipe using your fingers. 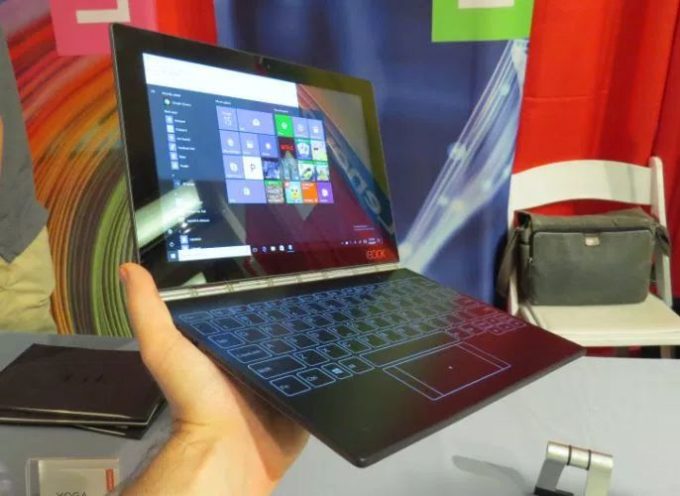 The hardware is pretty much the same on both models. The only difference is that when you turn on the light that outlines a virtual keyboard on the “Create Pad” section, you’ll see a Windows-style keyboard layout on one model and a version with Android-friendly buttons on the other.

Its stand-out feature is the Create Pad with its “Halo Keyboard” trick, which lets you type on keys that don’t actually exist, and swipe on a touchpad which is really just a small section of the Wacom graphics pad dedicated to the task.

If you want a convertible notebook that’s super-slim, the Yoga Book fits the bill. It measures just under 0.4 inches thick and weighs about 1.5 pounds.

But early reviews suggest the Halo Keyboard can be very difficult to get used to. So this is probably a machine that will appeal primarily to folks who really plan to use the Wacom pen that comes with the Yoga Book.

As I learned when I got some hands-on time with the tablets last month, the pen feels more like a real pen than the small sticks that come with some phones and tablets. You can even change the pen tip to one with ink if you want to write on a sheet of paper placed atop the graphics pad (your notes will be saved to the computer at the same time as they’re scribbled on paper).

But I also have awful handwriting, so I don’t spend a lot of time using pen and paper. The last thing I personally need is a computer designed for handwriting input.

Engadget, The Verge, Laptop Magazine, and Android Central have posted some of the first reviews of Lenovo’s unusual convertible tablet. Most reviewers seem impressed with Lenovo’s ability to think outside the box: there’s really nothing else like the Yoga Book on the market.

And for creative types likely to use the pad more than the keyboard, it seems like an intriguing, not-too-expensive option. But if you want a real laptop replacement, this might not be the best option.