Asus may not be the only company looking to launch a mobile Windows PC with a big foldable display and a 12th-gen Intel Core processor.

Lenovo was the first major PC maker to launch a Windows tablet with a foldable display, but the first-gen ThinkPad X1 Fold met underwhelming reviews when it first launched. The 13.3 inch display doesn’t provide a lot of screen space when folded in half, and the computer’s Intel Core i5-L16G7 processor was kind of a stinker.

It looks like the new model will address both of those issues. The 16 inch display is 22 percent larger than the previous-generation, while slimmer bezels and a thinner chassis should keep the computer fairly compact.

The display has a 4:3 aspect ratio while unfolded, supports up to 600 nits brightness, and supports HDR and Dolby Vision. Unlike the first-gen (and the Asus Zenbook Fold 17 OLED), the ThinkPad X1 Fold Gen 2 can also be configured with an optional Wacom digital pen. 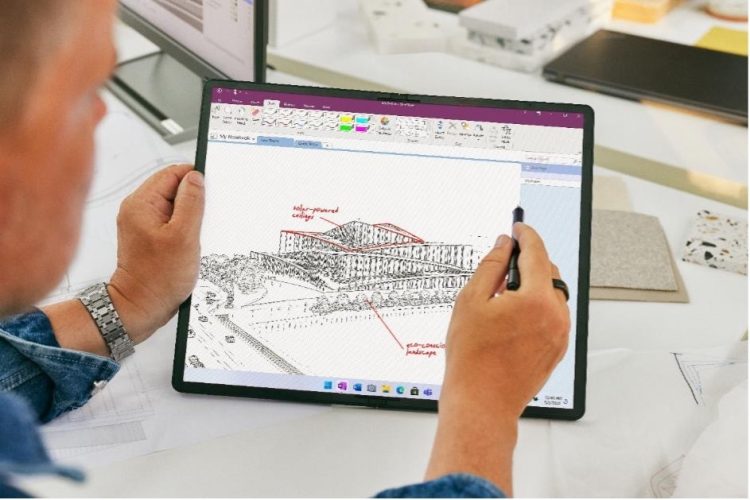 The Thinkpad X1 Fold Gen 2 is designed to work with an optional keyboard accessory featuring full-sized, backlit keys and a Lenovo TrackPoint system featuring both a large haptic touchpad and a pointing stick in the center of the keys.

Fold the display at the middle and snap the keyboard on the lower section and you effectively have a 12 inch notebook computer. Or if you forego the physical keyboard you can use the lower portion of the folded display as a virtual keyboard.

Fold the tablet entirely in half and it takes up about as much space as a typical 13 inch notebook, making it easier to carry around or store in a carrying case.

A built-in kickstand also allows you to prop up the tablet on a flat surface for use in landscape or portrait orientation.

Under the hood, the computer will have a significantly higher-performance processor with Intel Iris Xe integrated graphics. 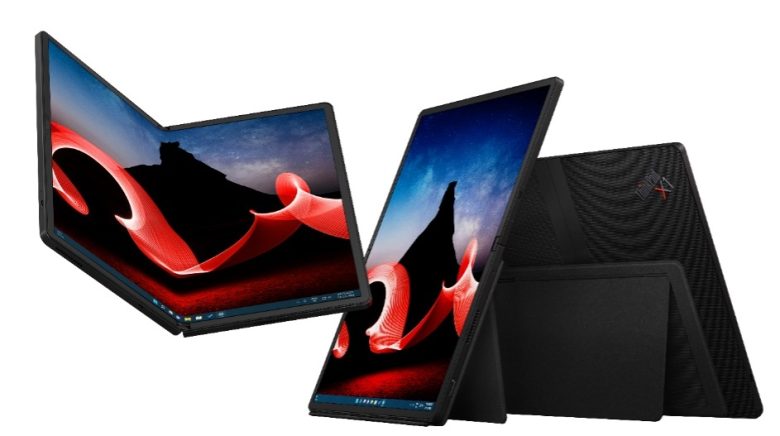 The computer also has three speakers with Dolby Atmos sound. They’re configured so that two will always be active in order to provide stereo sound in portrait or landscape mode. There are also two microphones.

Other features include two Thunderbolt 4 ports, a USB Type-C port, an Intel Visual Sensing Controller AI-based chip that works with the tablet’s camera to make sure that you stay in the frame during video calls and enables a “wake-on-approach” feature that will allow the computer to sleep when you walk away and wake when you return.

The tablet is said to feature a MIL-STD-810H tested design and the whole thing measures 17.4mm (0.7 inches) thick).

More details will likely be announced soon. I wouldn’t be surprised if the press release and images leaked just ahead of this week’s IFA show in Berlin for a reason.