Lenovo is expected to launch a new line of Yoga tablets this week, including new models with 8, 10, and 13 inch displays. Some will run Android, while others will run Windows.

Up until recently that’s about all we knew about the new tablets. But new details have emerged, giving us a better idea of what to expect from Lenovo’s October 9th event. 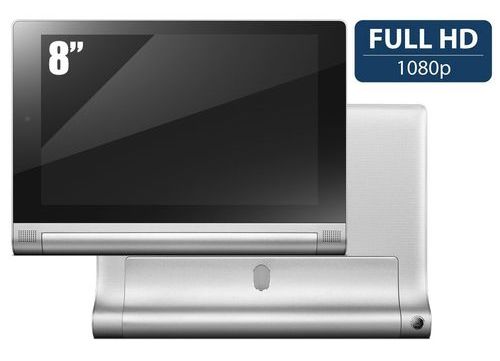 All of the new tablets seem to keep the same design language as last year’s Lenovo Yoga tablets, including a unusual design where one side of the tablet is thicker and heavier than the other. This gives you something to grip when holding the tablet in a single hand, gives Lenovo a place to stuff a large battery, and allows the tablets to include a small kickstand that you can use to prop up the tablet without worrying that it’ll tip over.

The 8 inch tablet will have 16GB of storage or more and may support making voice calls over LTE, allowing you to use the tablet like a big phone. This model is expected to weigh about 14 ounces.

The 8 inch tablet is expected to sell for 218 Euros when it goes on sale in Europe on October 23rd, while the 10 inch model should sell for about 440 Euros.

Other specs for this model seem to be pretty much the same as those for the 10 inch tablet, including an Atom Z3745 processor, 2GB of RAM, and 32GB of storage.

The 13 inch tablet is expected to be available in Europe starting October 23rd for about 475 Euros. I haven’t seen any news about US pricing.

I also haven’t seen any more news about the Windows versions of these tablets — but since all three models feature Intel Atom processors, it’s possible that the only differences between the Android and Windows versions will be the software (and a Windows logo below the screen).

We should find out more about these devices when Lenovo holds its launch event on October 9th.

via Mobile Geeks and Comparatif Tablette