Lenovo plans to launch 8 new ThinkBook laptops in the next month or two, with starting prices ranging from $549 to $939 depending on the model.

Five of the new laptops will be available with 11th-gen Intel Core “Tiger Lake” processors, while the other 3 are powered by AMD Ryzen 4000U “Renoir” chips, and Lenovo offers screen sizes ranging from 13.3 inches to 15.6 inches.

Normally I find the largest models to be the least interesting, because Liliputing is a site about Lilliputian computers… but in this case I’ll make an exception and highlight the Lenovo ThinkBook 15 Gen 2, because it’s a fairly thin and light laptop, and also because it’s available with one of the most unusual optional features I’ve seen in a laptop: integrated wireless earbuds. 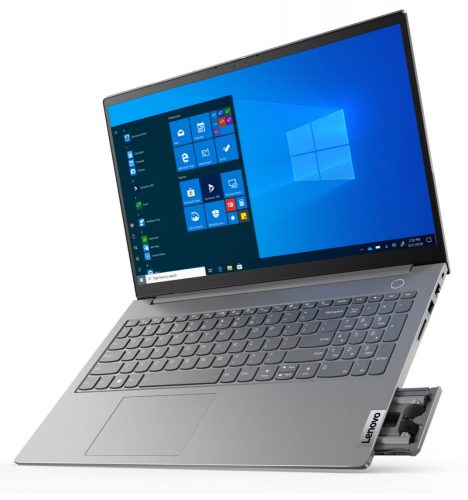 Here’s the idea: not only does the notebook come with a set of true wireless earbuds, but when you’re not using them they live in a tray that slides out from the front right side of the laptop. They charge automatically when they’re docked in the laptop, which is probably a good thing, since Lenovo is only promising up to 2 hours of battery life when you’re using the earbuds at 70-percent volume.

Like most halfway decent true wireless earbuds, the Lenovo version has touch controls (you can mute or unmute yourself during a conference call by double-tapping the side), and there are dual microphones for noise cancellation.

The earbuds are an optional feature, but they’re certainly one of the most distinctive things about Lenovo’s new laptops.

Other specs for the Lenovo ThinkBook 15 Gen 2 look pretty decent. It’s a 3.75 pound notebook that measures 0.74 inches thick, has a 15.6 inch full HD display (touch optional), stereo speakers, and support for up to an Intel Core i7 Tiger Lake processor, optional NVIDIA GeForce MX450 graphics, support for up to 40GB of DDR4-3200 dual-channel memory, and support for up to two SSDs or a single SSD and a hard drive.

The laptop is expected to be available in November for $569 and up. There’s also an AMD-powered version of the laptop with similar specs, but a $549 starting price and no wireless earbud option.

You can find more details in Lenovo’s press release.