It looks like Lenovo may be preparing to update its Yoga line of Android tablets with a new model featuring low-end specs, but one premium features: extra-long battery life.

Lenovo hasn’t yet introduced the new tablet, but Ukranian retailer Rozetka has posted a product page for the Lenovo Yoga 3 8″ tablet, complete with pictures and a detailed spec sheet. 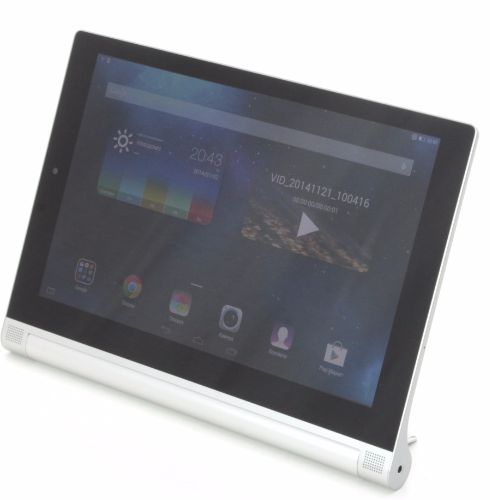 The Yoga 3-850 tablet has the same basic design as the first two models in this series, complete with a built-in kickstand and room for a cylindrical battery on one side of the tablet.

There’s one major difference though: the new tablet doesn’t have front and back cameras. Instead there’s a single 8 megapixel camera built into the battery-holding cylinder. The camera can rotate 180 degrees to face the front of the tablet or the back, which means you don’t have to settled for an inferior camera when snapping selfies or making video calls.

Other features include a Qualcomm Snapdragon 210 quad-core processor, 1GB of RAM, 16GB of storage, and a 1280 x 800 pixel IPS display. The tablet has a microSD card reader, WiFi, Bluetooth, optional 4G LTE, and stereo front-facing speakers. The Yoga 3 8 will ship with Android 5.1 Lollipop software.

According to the product page, the new tablet features a 6200 mAh battery which should provide up to 20 hours of run time.

While the new tablet should have longer battery life, other specs suggest it should be cheaper than the Yoga 2 8, which currently sells for about $200.