Lenovo is updating its Yoga line of Android tablets, and the top-of-the-line model has some fairly unusual features including a built-in projector and four speakers.

The Lenovo Yoga Tab 3 Pro isn’t the first tablet-with-a-projector from Lenovo. Last year’s 13 inch Yoga Tablet 2 Pro had one as well, but the new model has a faster processor and it should be a bit more portable, thanks to its 10.1 inch display. The projector has also been moved so that it should be easier to use the tablet while it’s projecting.

Lenovo says the Yoga Tab 3 Pro will be available in November. 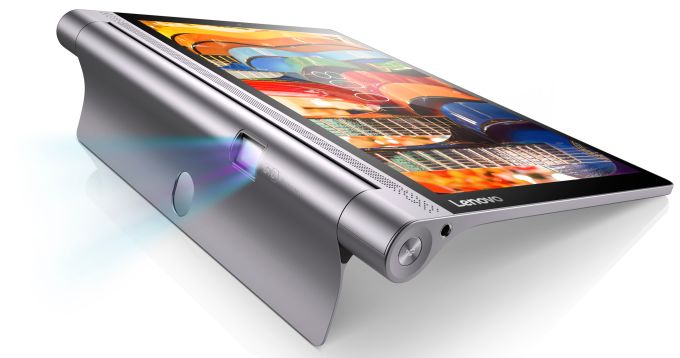 The four front-facing speakers are from JBL audio, and the tablet also features and Dolby Atmos audio technology. Lenovo says the projector can cast images up to 70 inches wide.

Thanks to an large 10,200 mAh battery, Lenovo says the Tab 3 Pro should get up to 18 hours of active battery life or up to 49 days of standby time.

Like other members of the Yoga tablet family, it has a built-in kickstand that folds out to let you prop up the tablet in stand mode or tilt mode. You can also hang it on a wall thanks to a hole in the kickstand.

The tablet features 802.11ac WiFi, Bluetooth 4.0, and GPS and optional 3G and 4G mobile broadband, at least in select markets.

On the back of the tablet, there’s a 13MP camera with support for auto-focus, while there’s a 5MP fixed-focus camera on the front.

A WiFi-only model will sell for €349 in Europe, while the LTE model has a suggested price of €599.

6 replies on “Lenovo Yoga Tab 3 Pro has its own projector, 4 speakers”