This week Lenovo introduced half a dozen new laptops including the AMD-powered Lenovo Yoga 6 with a fabric-covered lid and a bunch of new Lenovo Yoga 7 series laptops and convertibles with more traditional designs.

But the company’s not quite done — Lenovo posted shared a teaser for another thin and light Yoga-branded laptop on Chinese social media service Weibo. 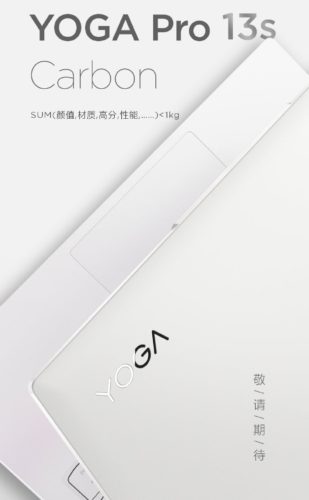 Official details are scarce, but the upcoming Lenovo Yoga Pro 13s Carbon is described as weighing less than a kilogram (or 1.1 pounds), and appears to have a white chassis.

Unofficially, some information about this laptop leaked last month, when WalkingCat tweeted some slides from a Lenovo presentation. Here’s what we’re expecting:

Lenovo’s been offering a line of premium thin and light laptops made with carbon fiber materials under the ThinkPad X1 Carbon name for a number of years. But this new laptop may be one of the first non-ThinkPad models to use the carbon name.

It also appears to be first Lenovo Carbon computer that will be available in white rather than black.