The tablet has a built-in kickstand, a detachable keyboard cover (with backlit keys), and digital pen support. Other features include WiFi 6, Bluetooth 5.0, and optional support for 4G LTE. ANd the tablet has an IR camera for Windows Hello face recognition.

Lenovo says the Yoga Duet 7i will be available starting in June for €1199 ($1320) and up in Europe at “select retailers” and through small business channels. 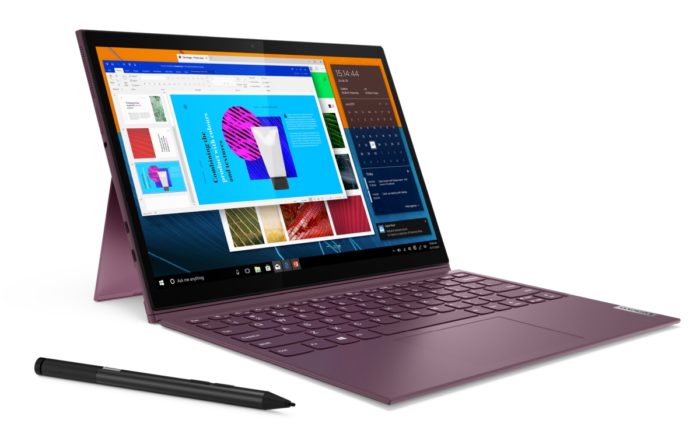 The Yoga Duet 7i’s display supports up to 450 nits of brightness and 100-percent sRGB color gamut, and Lenovo says the system will be available with Windows 10 Home or Pro software.

One of the tablet’s most unusual features is its support for a new type of digital pen called the Lenovo E-Color pen. According to Lenovo, it has a built-in color sensor that lets you detect colors by touching the pen to the surface of a real-world object and pressing down… and then you can apply that color to digital content using tools like Adobe Photoshop, InDesign, or Illustrator. The pen is sold separately as an optional accessory for the tablet.

One discrepancy between the Yoga Duet 7i press release and spec sheet has me scratching my head though. According the press release, Lenovo’s new premium 2-in-1 tablet supports “up to 10th Gen Intel Core i7 processors with Intel Iris Plus graphics,” which would seem to indicate an Intel Ice Lake processor. But the spec sheet only shows Core i3-10110U, Core i5-10210U, and Core i7-10510U Comet Lake processor options with Intel UHD gaphics.

Maybe there will be multiple configurations. Or maybe one of these documents in incorrect.