Lenovo’s Yoga Book convertible laptops are some of the strangest personal computers unveiled this year. First introduced at IFA in Berlin a few weeks ago, this laptop with a Wacom digitizer where you’d normally find a keyboard is now available for pre-order in the United States.

A Lenovo Yoga Book with Android is priced at $500, while a Windows model sells for $550.

They should both begin shipping in mid-October. 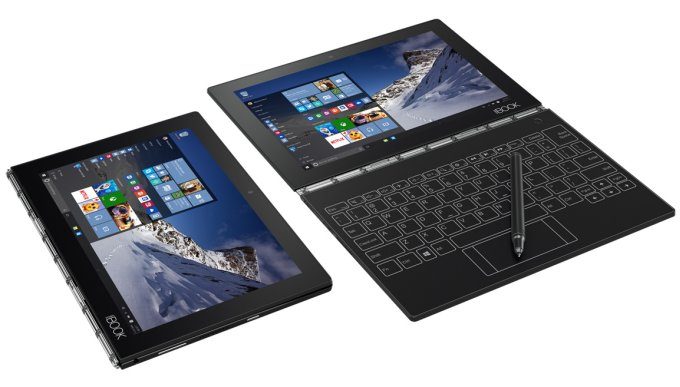 For the most part, the price difference is due to the cost of a Windows license. The two laptops are nearly identical, with both featuring 10.1 inch, 1920 x 1200 pixel IPS displays, Intel Atom x5-Z8550 Cherry Trail processors, 4GB of RAM, 64GB of storage, 802.11ac WiFi, Bluetooth 4.0, and Lenovo’s watchband-style hinge that allows the screen to be folded back 360 degrees.

They also both feature a “Create Pad” instead of a physical keyboard.

You can scribble notes, sketch pictures, or interact with other art or note-taking apps by applying a digital pen to the pad, which recognizes 2048 different levels of pressure sensitivity. You can even put a piece of paper (or a small pad) between the pen and the graphics pad, which allows you to create paper notes and save digital copies at the same time.

When you want to type, just press a button on the Create Pad and a backlight will show the outlines of a keyboard, allowing you to place your fingers on the correct spaces. It’s not quite as tactile an experience as using a physical keyboard, since you can’t feel where one key stops and the next begins. But there is some haptic feedback: the pad vibrates when you touch a “key.”

I’ve only spent a few minutes with the Yoga Book, but I found the virtual keyboard a lot easier to use than I would have expected, but I wouldn’t want to use it to write a novel. The Yoga Book has all the makings of a secondary device, not a replacement for your primary computer — although I suppose if you can get used to typing long documents on the keyboard, write with a pen instead of typing, or get by without ever composing long documents, it could be the only machine you need.

The Windows and Android versions have slightly different keyboards (there’s no Windows key on the Android model, for instance), and obviously they each come with different software.