Lenovo may be preparing to launch a next-generation Yoga tablet. A listing for an unannounced Lenovo Yoga 3 Pro showed up at the Indonesian equivalent of the FCC recently. 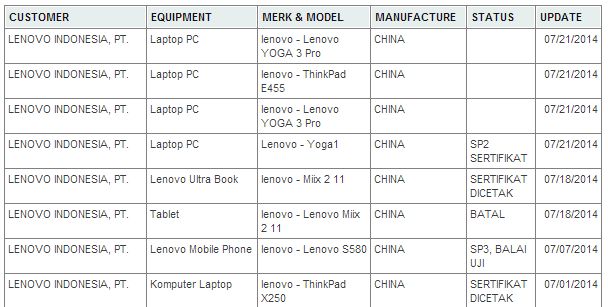 Aside from the fact that the Yoga 3 Pro is described as a “laptop PC,” there’s not much we know about it at this point. But Lenovo’s Yoga line of laptops are actually convertible 2-in-1 devices that also work as tablets. Just push the touchscreen screen back 360 degrees until it’s back-to-back with the keyboard and you’ve got a kind of heavy Windows tablet.

It’s not clear what new features a Yoga 3 Pro would have, but a faster processor is a possibility. Perhaps this model will ship along with Intel’s next-gen processors, code-named “Broadwell.”

The Lenovo ThinkPad X250, meanwhile, it likely an updated version of the ThinkPad X240 which is a 12.5 inch ultrabook.