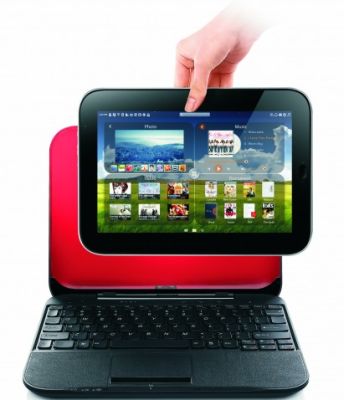 As expected, Lenovo is re-introducing the IdeaPad U1 Hybrid that the company first showed off at CES 2010. Like last year, the Hybrid is a two-piece device, with a standalone tablet (now called the LePad) and a keyboard/docking station with a separate processor, battery, and hard drive. Docked, you can use the U1 Hybrid like a laptop. Undocked, you can use the standalone tablet.

This year’s model replaces the custom Linux-based Skylight OS on the tablet with Google Android, while the U1 Hybrid continues to run Windows 7 when docked. Lenovo is also promising software that lets you continue browsing the same web page, even when switching operating systems so that you can open a web site in laptop mode, remove the tablet and keep reading even though you’ve switched from Windows to Android.

Lenovo has also reduced the size of the device. Last year we were looking at an 11.6 inch screen. This year the LePad has a 10.1 inch, 1280 x 800 pixel display. The tablet currently runs Google Android 2.2 Froyo with a custom Linux user interface running on top. It looks like there will also be an optional keyboard docking station allowing you to touch type on the LePad in Android mode.

The LePad will be available as a standalone device in China for about $520, while the U1 Hybrid will run about $1300. There’s still no word on a US launch date.

via Gizmodo and GottaBeMobile