Every notebook manufacturer seems in a rush to push ultrabooks on everyone, but there are still some of us who don’t want to sacrifice productivity for portability. The $1,289 Lenovo ThinkPad X230 Tablet isn’t competing to be the lightest or thinnest ultraportable around.

Instead, it makes the case that a small package can pack real power (no Ultra Low Voltage processor here) and still be light enough to carry everywhere.

The model Lenovo loaned me for the purpose of this review includes a bonus tablet mode, but if you like the overall concept there’s a less expensive, laptop-only version as well. 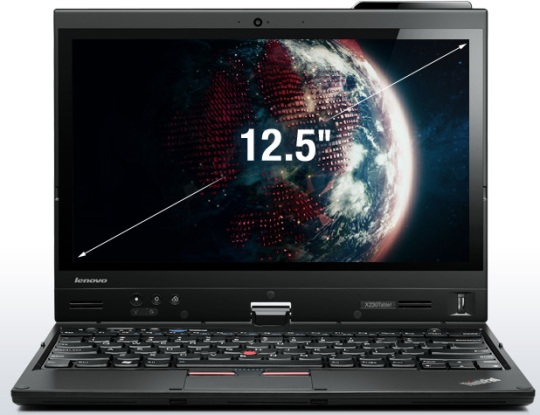 The ThinkPad X230T has a magnesium alloy chassis that’s 1.2 inches thick and weighs about 4 pounds with the 6-cell battery. The overall design is distinctly Lenovo down to the battery sticking out the back, with a few nods to the more modern look the company started pushing a few years ago. 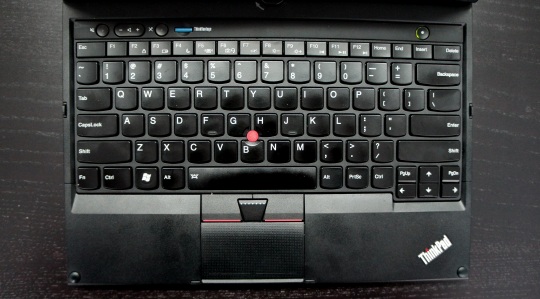 The full-sized, backlit, spill-resistant keyboard has Edge-style isolated keys, not the old-school look. You’ll still get a great typing experience, though, thanks to ample tactile feedback and keys with a comfortable dip in the middle.

The touchpad is small, but size isn’t an issue since it’s a clickpad-style with integrated mouse buttons. For a PC clickpad it’s not bad; I didn’t experience random cursor jumps, accidental multitouch activation, or a hard to control cursor.

For those who find the touchpad a bit small, there’s also the Lenovo TrackPoint and three physical mouse buttons. The TrackPoint nubbin sits low enough that my finger didn’t accidentally hit it while typing, yet it’s still easy to find, use, and control. 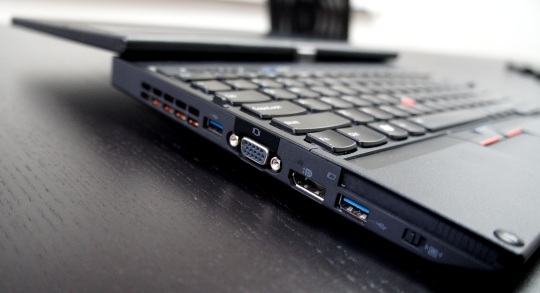 Lenovo packed the X230 Tablet with a generous port suite: 3 USB (2 USB 3.0, 1 USB 2.0), 4-in-1 card reader, ExpressCard slot, VGA, DisplayPort, Ethernet, and a combo headphone/mic, lock slot and digitized stylus port. The fingerprint reader sits on the display’s bezel for accessibility when the X230T is in tablet mode.

The 12.5-inch display is outdoor visible and has wide viewing angles. Despite being matte, the colors pop nicely. The all-too-common resolution of 1366 x 768 is the max.

As this is a convertible tablet notebook, the display swivels around to rest flat against the keys. The hinge is very sturdy and feels like it can withstand hundreds or thousands of open/close and swivel operations.

Even though the lid is only supported by what seems a small spindle, the screen stayed steady while I typed. It is possible to use the touchscreen while it’s in laptop mode, but it does bounce a bit when you tap. 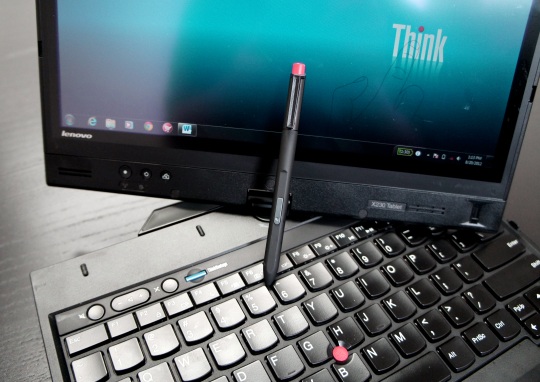 Switching to tablet mode, the X230T sometimes took up to 30 seconds to situate itself in terms of orientation and resizing windows. There is an accelerometer that senses orientation switches, but you can turn this off and use the manual buttons on the bezel, instead.

For those familiar with digitized pens, the experience here is nothing new. I found the stylus both accurate and responsive and the screen offered good palm rejection.

The X230T will also respond to capacitive/finger touch. Though less accurate than the stylus, this means you don’t have to pull the pen out every time you need to tap or swipe. 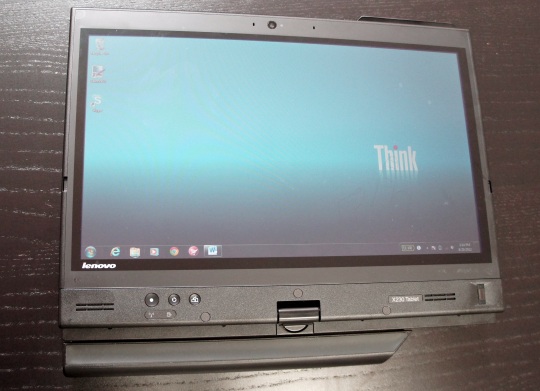 As with most ThinkPads, the X230 Tablet comes packed with pre-loaded software that’s mostly useful. Beyond Lenovo’s ThinkVantage tools there are also cloud backup, note-taking, and DVD creation apps.

The HD webcam above the display captured decent images in good lighting and did okay in poor lighting during video calls. Thanks to the dual-array noise-canceling integrated mic the people on the other end won’t be able to hear you typing. 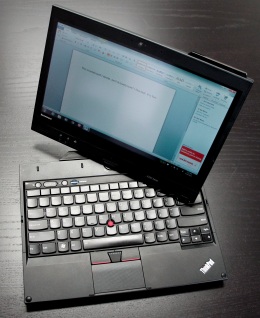 The configuration I tested (base price: $1289) has an Intel Core i5-3320M (Ivy Bridge) processor, 4GB of RAM, integrated HD Graphics 4000, and a 7,200 rpm, 500GB hard drive. This made for speedy, robust performance throughout my time testing this laptop, even with moderately heavy multitasking.

The difference between this and the ultra-low voltage processors you find in ultrabooks is most evident in programs and tasks that require more power to run well. The X230T will even do a decent job editing and encoding video or crunching images and won’t take too long to get the tasks done.

However, if these kinds of tasks make up the bulk of your work week, consider upping the power under the hood to a Core i7 CPU and bumping up to 8GB or 16GB of RAM. It’s also possible to get at the RAM and hard drive yourself via a panel on the bottom.

During testing I didn’t notice some noise from the fan, though it did work because the unit didn’t get very hot even when I held it in tablet mode.

The review unit Lenovo sent came with the optional 6-cell battery (user-replaceable) instead of the 3-cell battery included in the base price.

I definitely recommend paying extra for the 6-cell since I was able to get a little more than 6 hours with Wi-Fi on constantly while surfing the web, writing, listening to music or playing the occasional video. That’s about right for all day on/off usage. 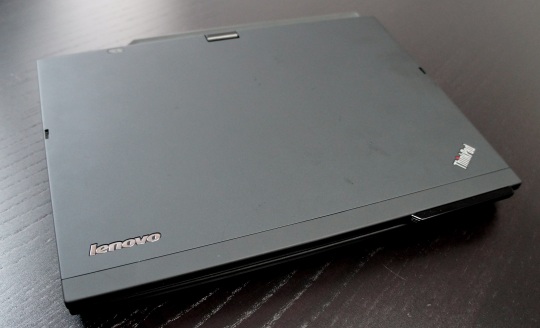 The Lenovo ThinkPad X230 Tablet balances portability, productivity, and power well, and does so at a decent price. This one is definitely for the small business crowd, entrepreneurs, or consumers who want a long-lasting tank of a laptop with an excellent keyboard.

If you’re not into the tablet aspect, check out the ThinkPad X230, which has all the same features sans the touchscreen and starts at under $800.