Lenovo has announced updates to its ThinkPad X1 line of premium laptops… but you’ll have to wait a little while to get your hands on the new models.

The 7th-gen Lenovo ThinkPad X1 Carbon is a 2.4  pound laptop that measures 0.6 inches thick and support for up to a 500 nit, 4K display with Dolby Vision, while the new 4th-gen ThinkPad X1 Yoga is a 3 pound convertible that’s less than 1 millimeter thicker — and which is 11 percent thinner than the previous-gen version.

Both should be available in June, 2019 and they’ll ship with 8th-gen Intel Core “Whiskey Lake” processors. 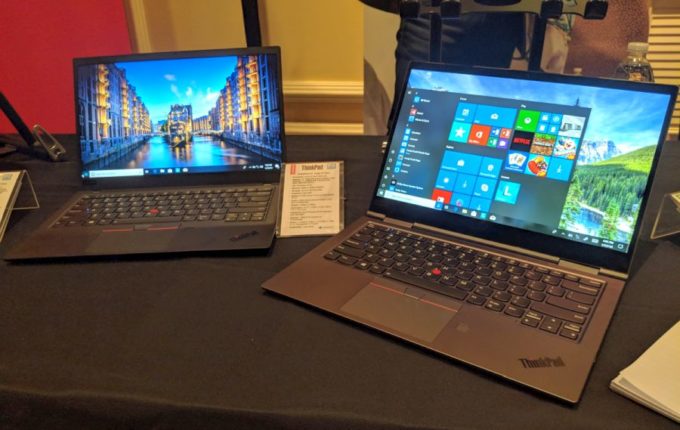 The ThinkPad X1 Carbon will also be 400 nit full HD display if you don’t want the higher-resolution (and more power hungry) 4K display.

Other features in the new model include support for Dolby Atmos audio (there’s a quad speaker system with two top-facing tweeters and two down-facing woofers), four far-field microphones for use with the Microsoft Cortana or Amazon Alexa voice assistants, and optional support for 4G LTE Cat 16.

The laptop also has a ThinkShutter physical switch that can cover the webcam and Windows Hello IR camera when you don’t want to be spied on.

It’s expected to sell for $1709 and up when it goes on sale this summer, with the entry-level model featuring a Core i5 processor, 8GB of RAM and 256GB of storage, but the system supports up to Core i7/16GB/2TB.

It’s also the company’s first ThinkPad with an all-metal (aluminum) chassis. Typically the company has used carbon fiber to offer lightweight, but durable products… but to the untrained observer, carbon fiber feels like plastic.

While aluminum weighs more than carbon fiber, Lenovo was able to keep the laptop light by reducing the system’s overall size. In addition to being thinner, it has smaller bezels on all sides of the screen for an overall 17 percent smaller footprint when compared with Lenovo’s 3rd-gen model.