The Lenovo ThinkPad Tablet is a 10 inch Android tablet aimed at business professionals. Lenovo offers the tablet with a stylus for writing, as well as an optional Folio case with a built-in keyboard and pointing nub. It also has a very business-like, no-nonsense design. But feature-wise the tablet is a lot like others released in late 2011, with an NVIDIA Tegra 2 dual core processor and Android 3.x Honeycomb operating system. 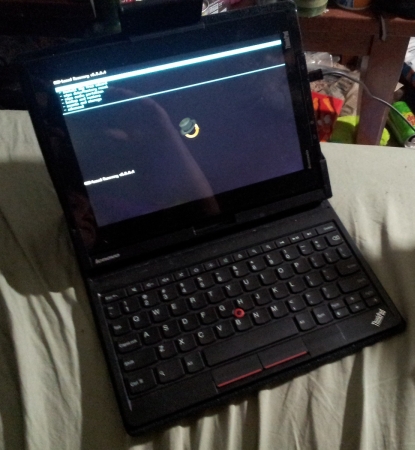 But one thing that’s set the ThinkPad Tablet apart is the difficulty hackers have had rooting the tablet and unlocking the bootloader in order to install custom recovery apps or other software. In fact, a number of ThinkPad Tablet owners started a bounty for the project in October.

Now security researcher Dan Rosenberg has finally come up with a way to root the ThinkPad Tablet. If you’ve already installed the Android SDK or at least enabled ADB on your computer, all you need to do is download the utility from Rosenberg’s site and run it on a Windows computer, following his instructions.

If you want to go a step further, you can also install ClockworkMod Recovery on the ThinkPad Tablet, thanks to some work from xda-developers forum member Justin Case. This will let you backup or restore your system of flash custom software. It’s also one of the first steps towards porting custom versions of Android such as CyanogenMod to run on the ThinkPad Tablet.

While the ThinkPad Tablet’s tight security was probably implemented partially as a business-friendly feature, I suspect another reason for the locked bootloader is the fact that the ThinkPad Tablet was one of the first Android devices to ship with Netflix certification. Netflix and other digital media providers have also insisted on strict security measures in other devices such as the Barnes & Noble NOOK Tablet.