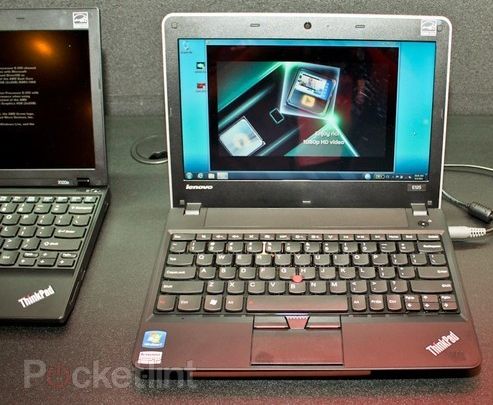 Lenovo began to show off a new ThinkPad ultraportable laptop at the Computex trade show in Taiwan last week. Pocket Lint snapped some photos and got a few details.

But like the case design looks a little more like the ThinkPad Edge line of laptops with a chromed edges around the lid. I also suspect the laptop has a glossy lid, but there’s no picture to confirm that detail at the moment.

The ThinkPad Edge E125 features an 11.6 inch display, an island-style keyboard, and Lenovo’s TrackPoint system which offers both a standard touchpad below the keyboard and a pointing stick in the middle of the keyboard. The laptop has three USB ports, HDMI and D-sub ports, Ethernet, and a headset jack as well as WiFi and Bluetooth.

There’s no word on the price or launch date for this model. I wouldn’t be shocked if this model is never released in the US. The ThinkPad Edge 11 never made it to North America.