Lenovo may be preparing to shake up its laptop branding conventions. Right now the company sells a line of business notebooks under the ThinkPad brand, and consumer models under the IdeaPad and Yoga names. But Notebook Italia recently spotted two Lenovo notebooks with unusual names at a trade show in China.

The Lenovo ThinkBook S laptops come in 13 inch and 14 inch sizes, and according to a few listings at online stores, they could hit the streets in Europe in late May for around 1,000 Euros. There’s no word on if or when we’ll see the new laptops in the United States.

Update: They are. The ThinkBook 13s and ThinkBook 14s are launching in the US in May with starting prices of $729 and $749, respectively. Lenovo is positioning them as laptops for the small business market. 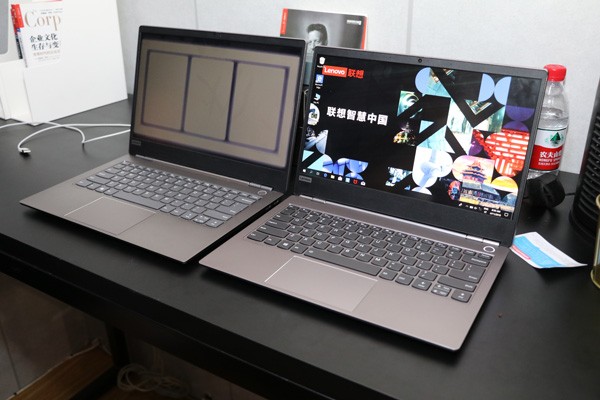 According to Notebook Italia, the new laptops seem to be positioned as replacements for previous-gen IdeaPad laptops, but they have new designs featuring metal boddies, slim bezels, and 180 degree hinges that allow you to fold the screen flat against a table.

Both the 13.3 inch and 14 inch models ahve 1080p displays, but for some reason the smaller one is brighter (with 300 nits compared to 250 nits for the 14 inch screen). The laptops feature 720p webcams with a built-in privacy shutter so that you can block the camera when you’re not using it without resorting to masking tape.

The ThinkBook 13s and 14s are expected to ship with up to an Intel Core i7-8565U Whiskey Lake processor, up to 16GB of RAm, up to 512Gb of solid state storage, and optional support for AMD Radeon 540X graphics, at least for some models.