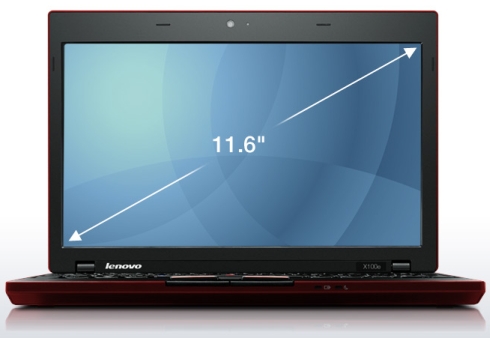 Update: Lenovo has officially launched the X100e. You can find more details here.

After weeks of leaked documents and rumors, it looks like Lenovo is getting ready to launch an 11.6 inch business notebook called the ThinkPad X100e. The product page for the X100e went live this morning, although Lenovo says the notebook won’t be available to order until January 5th.

The laptop features an AMD processor (probably a Neo MV-40), 11.6 inch HD display, full sized keyboard, and both a touchpad and a pointing stick.

It also features 3 USB ports, a 4-in-1 card reader, and HD audio as well as 802.11b/g/n WiFi and optional Bluetooth and 3G.There’s a combo mic/headphone jack and VGA output, but no HDMI.

The ThinkPad X100e weighs less than 3 pounds and Lenovo says the pricing is “affordable,” although there’s no mention on the web site of exactly what that means.

12 replies on “Lenovo spills the beans on the ThinkPad X100e”