The Lenovo Yoga Paper is an E Ink tablet with a 10.3 inch greyscale display that supports pen and touch input, a Rockchip RK3566 processor, 4GB of RAM, 64GB of storage, and Android-based software.

First announced earlier this year, the Yoga Paper is available in China for around $400 and up, but Lenovo hasn’t announced plans to sell the tablet in other countries yet. But that could change soon. In a series of tweets Evan Blass has been spilling the beans on Lenovo’s plans for the 2023 Consumer Electronics Show. Among other things, he says Lenovo will introduce an E Ink tablet called Smart Paper. 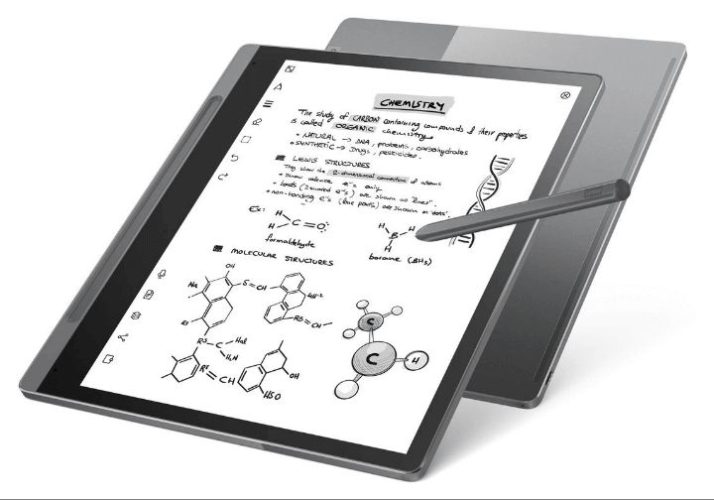 Judging by the pictures, the Smart Paper looks identical to the Yoga Paper tablet. The only obvious differences I can find are the name and the fact that the text in the images appears to be in English rather than Chinese.

While it’s certainly possible that Lenovo could change some specs or features for the global version of the tablet, I’d be surprised if it varies too much from the version available in China, which features:

The tablet has a thicker bezel on one side and features a slot for storing the digital pen when you’re not using it.

While this is Lenovo’s first tablet with just an E Ink display, the company has dabbled with the technology a few times over the years, releasing a few different dual-screen notebooks that used ePaper for one display (although sometimes that display was actually a keyboard).

There’s no word on how much Lenovo’s Smart Paper tablet will cost in the US and other global markets, or when you’ll be able to buy one. But we’ll probably learn more once the Consumer Electronics Show is underway next week.

Lenovo is hardly the only company playing in the E Ink & pen tablet space these days. Sony helped create the E-Note space with its Digital Paper lineup. ReMarkable has made a name for itself in recent years. A few less well known Chinese companies like Onyx BOOX and Bigme have a number of models with similar features. And some of the best-known companies in the eReader space including Kobo and Amazon have also released their own models.

I can’t help but wonder if there’s actually enough demand for the level of competition we’re seeing, and I wouldn’t be surprised to see some of the bigger companies exit the space in the coming years if the answer turns out to be no. But for now it’s looking like a golden age of E Ink tablets… for those willing to spend the money on a digital tablet for reading and writing. Tablets with E Ink displays still tend to be more expensive than models with LCD screens.